'Death to Arabs': Chaos erupts in Jerusalem after far-right march

Hundreds of far-right and anti-Palestinian activists took to the streets in Jerusalem's Old City on Thursday chanting "Death to Arabs" as they protested through the city centre.

The march, led by Lehava, a far-right Israeli group, was organised as a call to "restore Jewish dignity" in Jerusalem.

It came after a week of increased violent assaults against Palestinian citizens of Israel in the Old City.

Israeli newspaper Haaretz reported that the uptick in anti-Palestinian violence began after a video was posted to TikTok of an ultra-Orthodox Jewish man being slapped - seemingly at random - on Jerusalem's light rail train.

Two 17-year-old Palestinians were subsequently arrested in relation to the incident.

Israeli security forces attempted to block the anti-Palestinian march from reaching the counter-protesters, but Haaretz reported that eventually forces started shooting tear gas at the Palestinian activists, trying to disperse the crowd while utilising horse-mounted officers to push back far-right Israeli activists. 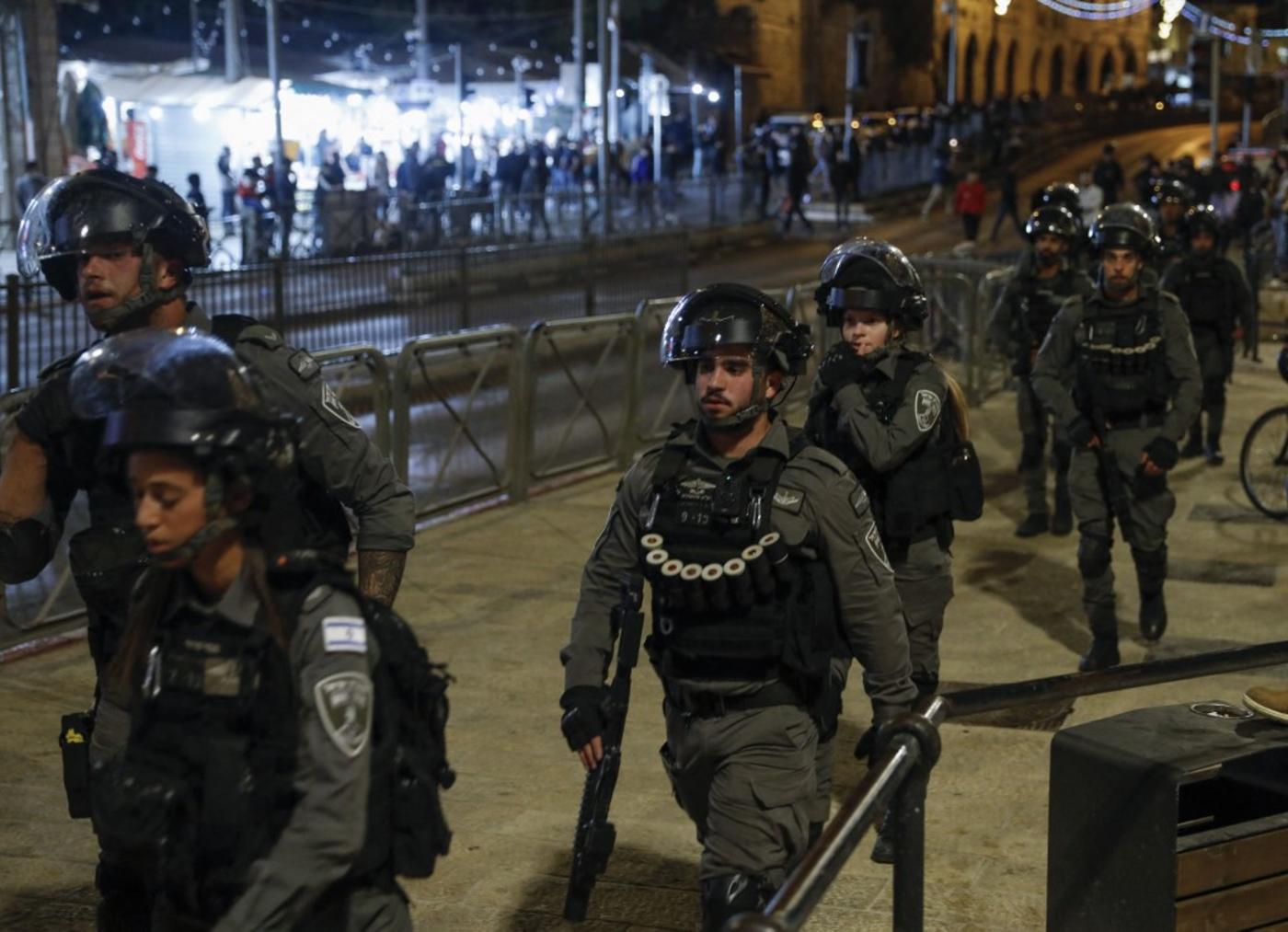 Footage circulating on social media showed police and hundreds of protesters running through the streets as the sound of either fireworks or stun grenades echoed in the background.

The Palestinian Red Crescent emergency service said 32 Palestinians were injured, including 12 who were hospitalised, the Associated Press reported.

According to Haaretz, Israeli far-right organisations used WhatsApp groups to call on protesters to carry guns, while posting instructions on how to avoid arrest.

The newspaper reported that in a group chat organised by the far-right group La Familia, a user posted: "Burning Arabs today, Molotov cocktails are already in the trunk…the way I see it, an Arab dies today."

In a video posted to Twitter, Israeli youth were filmed throwing pipes and other hard objects into the homes of Palestinian residents of the Old City.

Earlier on Thursday, a Jewish man maced a Palestinian woman in the face and a man driving in a car bearing an Israeli flag fired off a few rounds from a firearm near the Israeli Ministry of Justice.

The "Death to Arabs" slogan being used at the march is a staple at protests organised by Lehava, which is best known for its use of intimidation, harassment and violence to stop Israelis and Palestinians from dating or even being friends or coworkers.

While Palestinians make up around 20 percent of the Israeli population, with both communities living in close proximity in cities like Jerusalem, animosity runs high.

In February, a comprehensive study conducted at the Hebrew University of Jerusalem showed that 66 percent of the ultra-Orthodox, 42 percent of religious Israelis, and 24 percent of secularists "hate Arabs". The term "Arab" is commonly used in Israel as a way to challenge the existence of Palestinians and historic Palestine.

The same study showed that 49 percent of religious Israelis and 23 percent of secular citizens supported stripping the right to vote from Palestinians inside Israel.

'Death to Arabs': Chaos erupts in Jerusalem after far-right march

'Death to the Arabs': Racialized violence has always defined Israel

Last wish of Palestinian Prisoner was denied by Israel