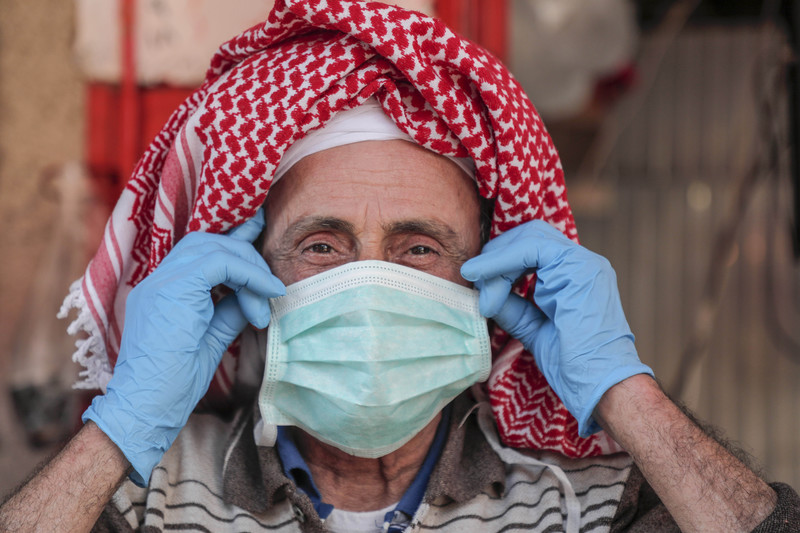 A Palestinian man wears a protective mask at the Gaza City market on 23 April.

One Palestinian was killed by Israeli fire during the month of April after attacking occupation forces at a checkpoint near East Jerusalem.

Video of the 22 April incident  shows a van hitting a Border Police soldier before the driver exits the vehicle and lunges at and chases the soldier. The video does not show the Border Police opening fire at the man.

The slain Palestinian was identified as Ibrahim Muhammad Ali Halasa, 25, from the village of al-Sawahira.

In another incident  that same day, a driver operating a car with Palestinian plates hit an Israeli Border Police soldier and a civilian at an ad hoc checkpoint near the Ateret settlement. The driver fled the area.

A 19-year-old Palestinian from the West Bank allegedly stabbed and wounded an Israeli woman in the town of Kfar Saba in central Israel before he was shot by a security guard on 28 April.

On 1 April, a 22-year-old Palestinian man died from wounds sustained after he was shot by Israeli soldiers during a demonstration in Beita village, south of Nablus, the previous month.

Since late February, Palestinians in the village have been protesting attempts by Israeli settlers to take over a nearby hill. Two Palestinians, including a child, have been killed during those protests.

Nour Jaber al-Barghouti, a 23-year-old Palestinian from the West Bank village of Aboud,died  after losing consciousness in Israel’s Naqab prison on 22 April. The Palestinian Prisoners club accused Israel of medical neglect in the death of the prisoner.

On 17 April, the annual Palestinian Prisoners Day commemoration, the human rights group Addameer stated  that Israeli authorities “have taken no steps to release Palestinian prisoners and detainees or to adequately mitigate and prevent a COVID-19 outbreak in prisons.”

Defense for Children International Palestine and the UN children’s agency UNICEF have called on Israel led on Israel to release the Palestinian children in its detention centers.

as of 28 April there were 495 confirmed cases of COVID-19 in the West Bank and Gaza Strip resulting in four deaths.

Israel demolished Palestinian-owned structures throughout the month on the pretext that they were built without a permit, despite the coronavirus pandemic.

“Following the outbreak of COVID-19, the Israeli authorities have largely halted the demolition of inhabited homes, but continued targeting livelihood and service-related structures,” the UN monitoring group OCHA stated  on 16 April.

“Of particular concern is the ongoing demolition of water and hygiene-related structures, which could undermine efforts to contain the spread of the virus,” OCHA added.

After Israeli forces demolished a donor-funded home on 23 April, displacing a family of eight, a United Nations humanitarian official called on Israel  to halt its demolitions.

Also during April, occupation forces uprooted 1200 trees in the West Bank on grounds that they were on “state land.”

Nearly 700 trees were vandalized by suspected Israeli settlers during the month as attacks on Palestinians and their property sharply increased  during the pandemic.

Israeli forces also attacked Gaza fishers  during the month, causing injuries as well as property damage. Israel sprayed herbicide  on agricultural land east of Gaza City on 6 April, damaging Palestinian crops, in the third such incident so far this year.

The coalition agreement includes a commitment that the Israeli government and parliament will, from July, proceed with votes to annex large parts of the West Bank. 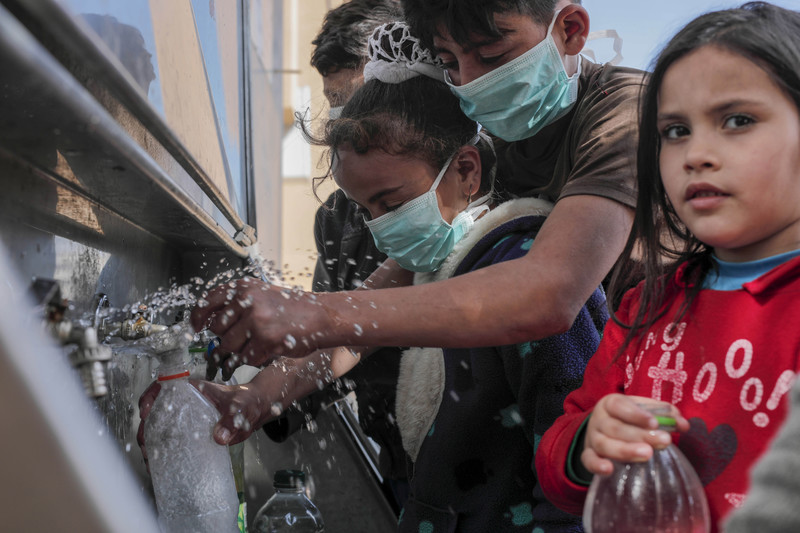 Palestinian children fill water bottles in a poor neighborhood in the Beit Lahiya area of northern Gaza on 9 April. According to UNICEF, half of the Gaza Strip’s residents are children and only one in 10 households has direct access to clean water. 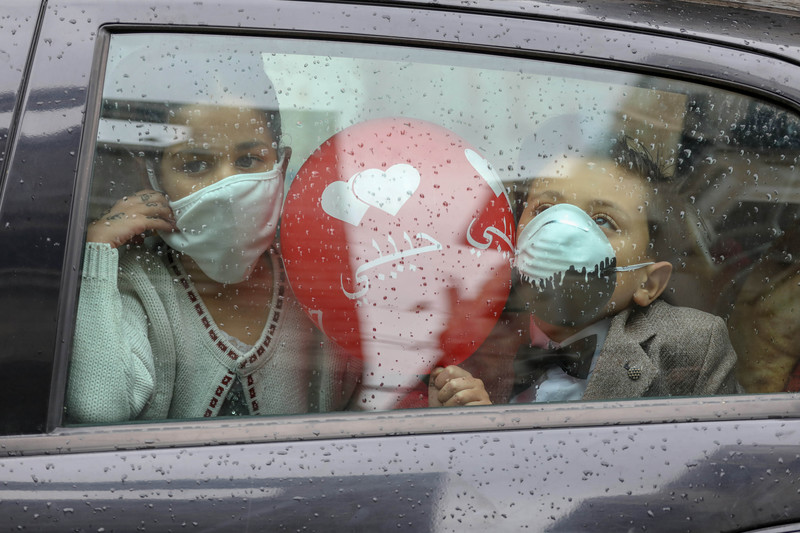 Palestinian children wear protective masks and look out from a car window during a wedding ceremony in Gaza City on 10 April. 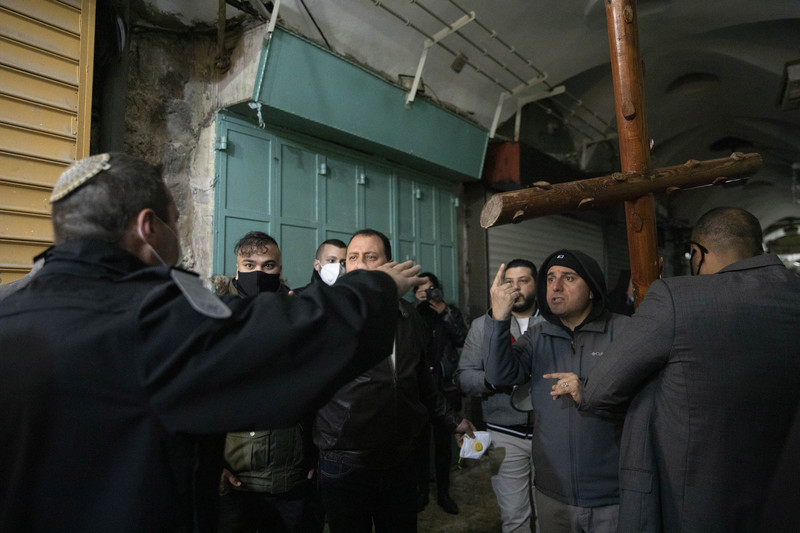 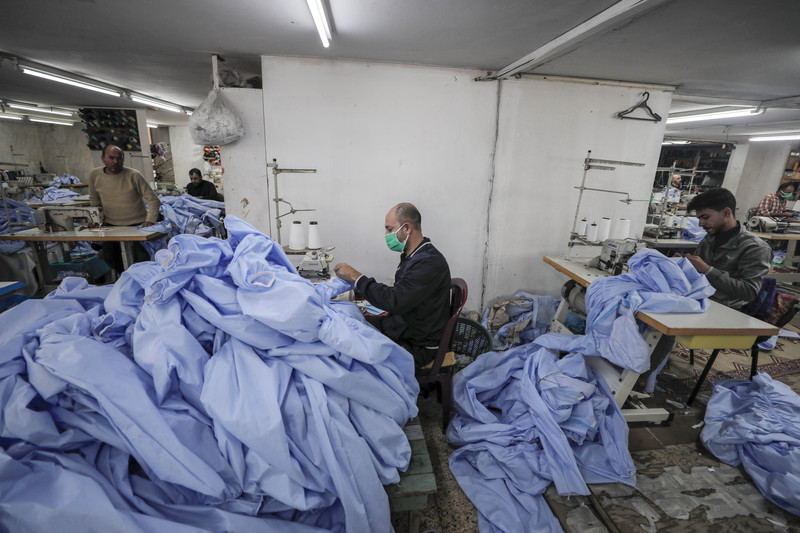 Palestinians manufacture protective masks and coverall suits at a small sewing factory in Gaza City on 12 April. Some clothing manufacturers in Gaza began making protective equipment for Israeli and West Bank markets amid the coronavirus pandemic. 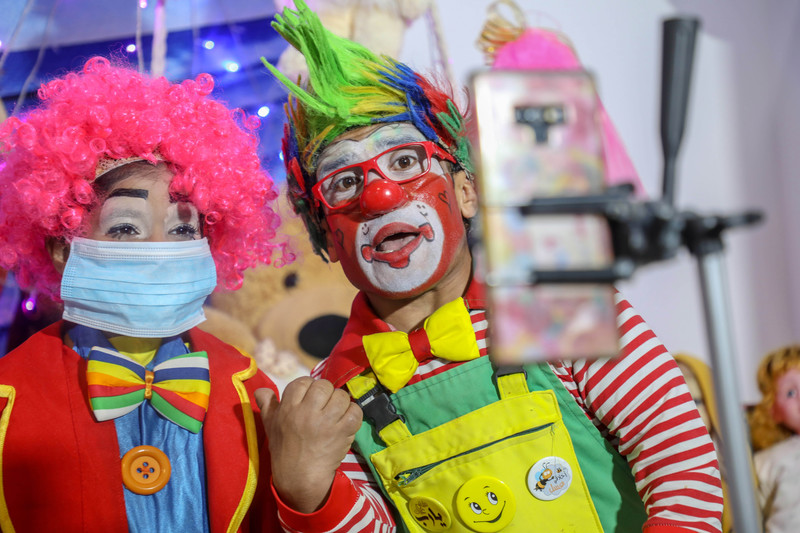 Palestinian clown Alaa Miqdad and his daughter entertain children over a live broadcast on Facebook amid the coronavirus pandemic, Gaza City, 13 April. 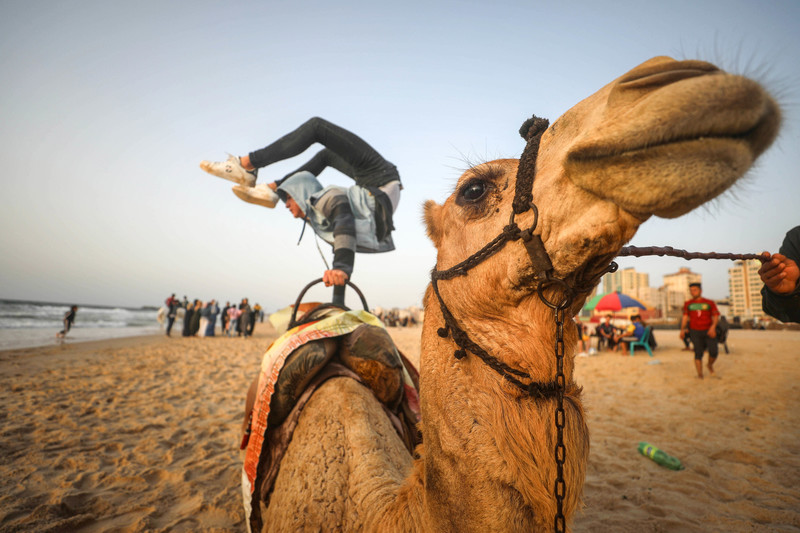 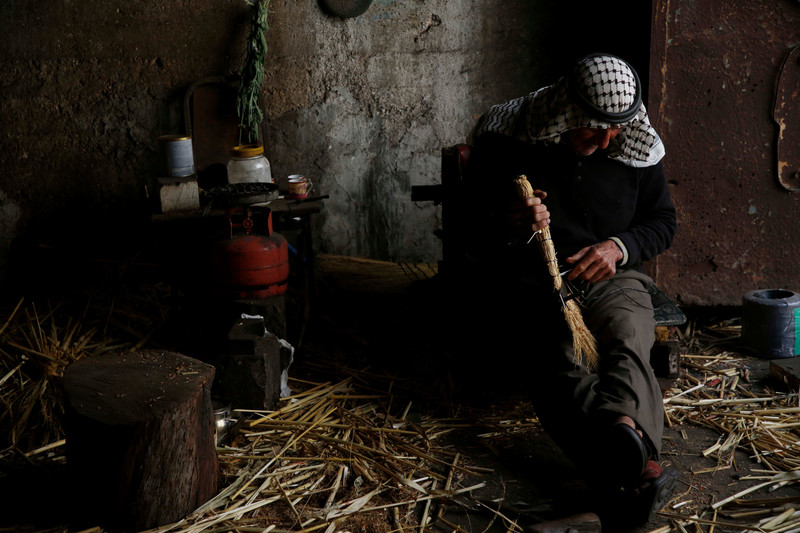 Sabri Dweikat, photographed in the West Bank city of Nablus on 20 April, has been making traditional straw brooms for 40 years. 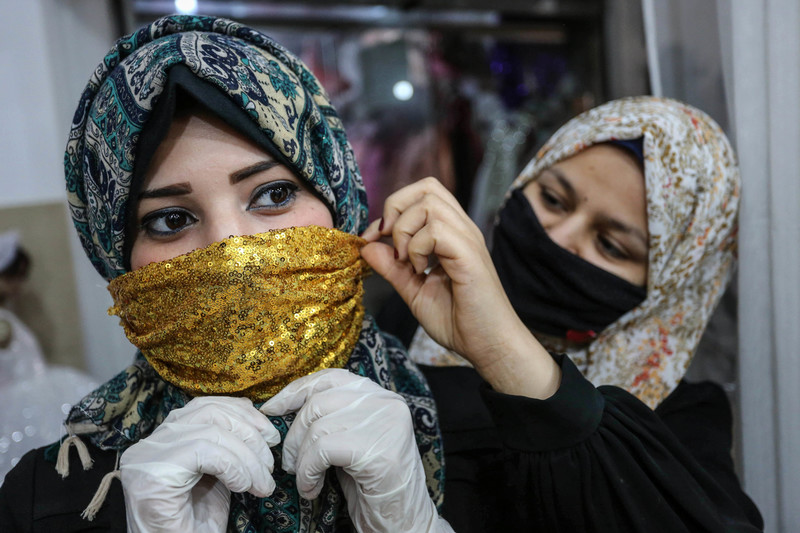 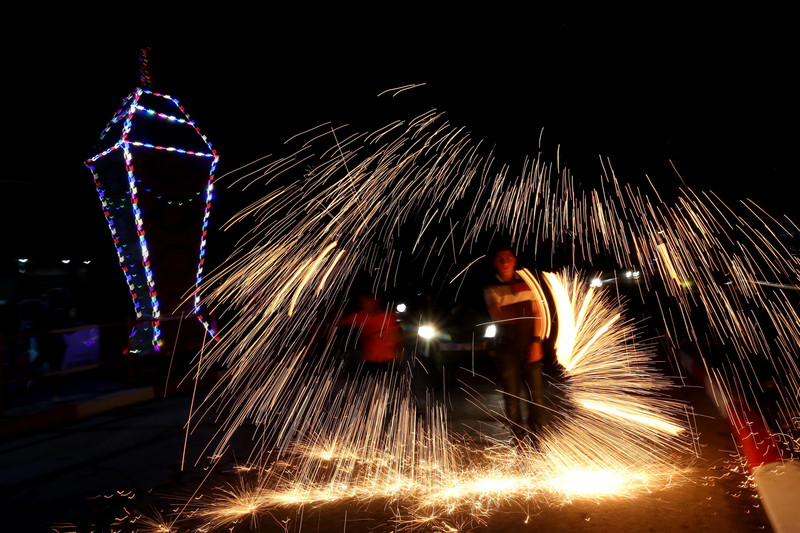 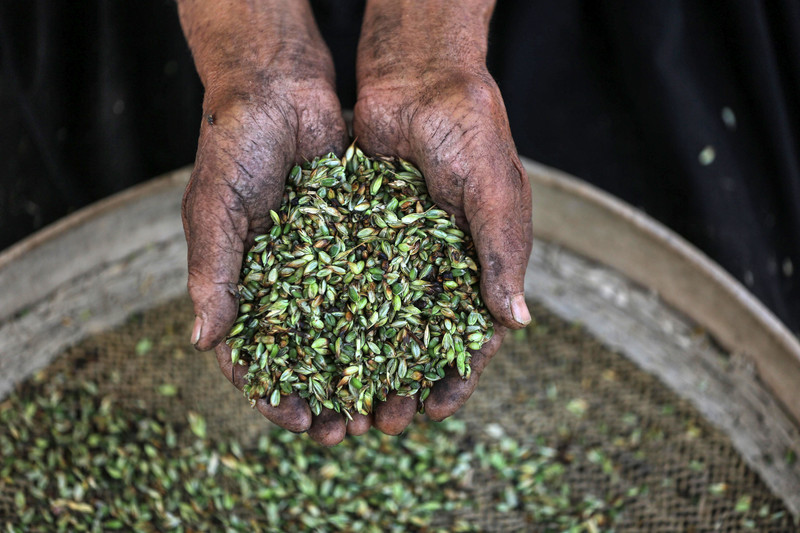 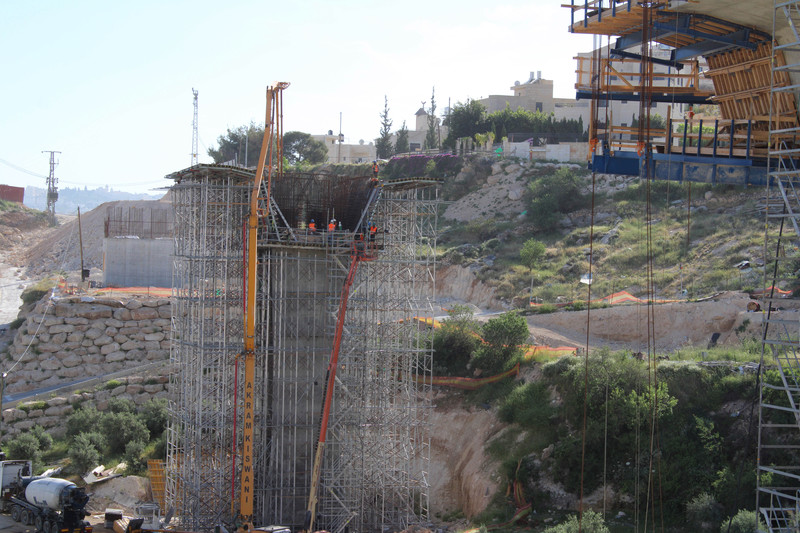 Workers construct a bridge stretching over Palestinian land in the East Jerusalem neighborhood of Sur Baher on 23 April. The bridge is part of a road intended to connect a number of Israeli settlements, from Har Homa to Maaleh Adumim. Israel has confiscated and expropriated large swathes of Palestinian land for the project, as well as demolished homes along the route. 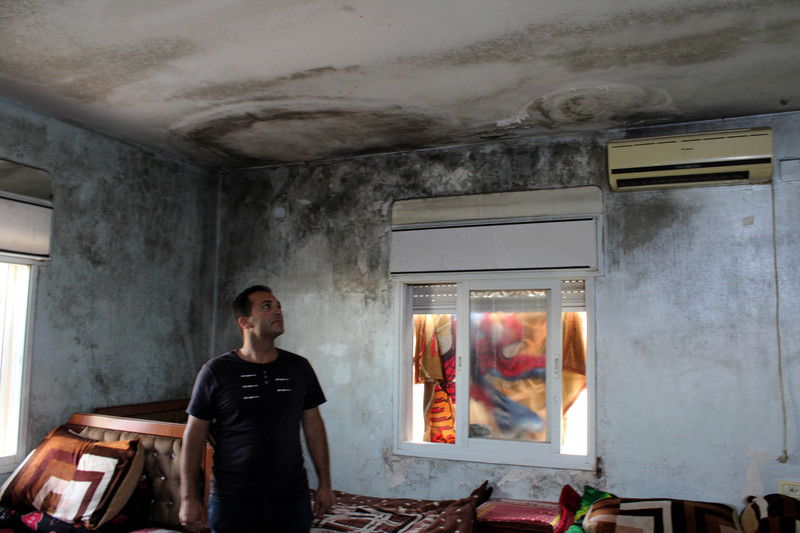 Ismail Abadiyeh, his wife and their six children remain homeless on 23 April after the demolition of their home in the Wadi al-Hummus area of Sur Baher, East Jerusalem, last July. The family currently resides in two mold-infested rooms belonging to distant relatives. 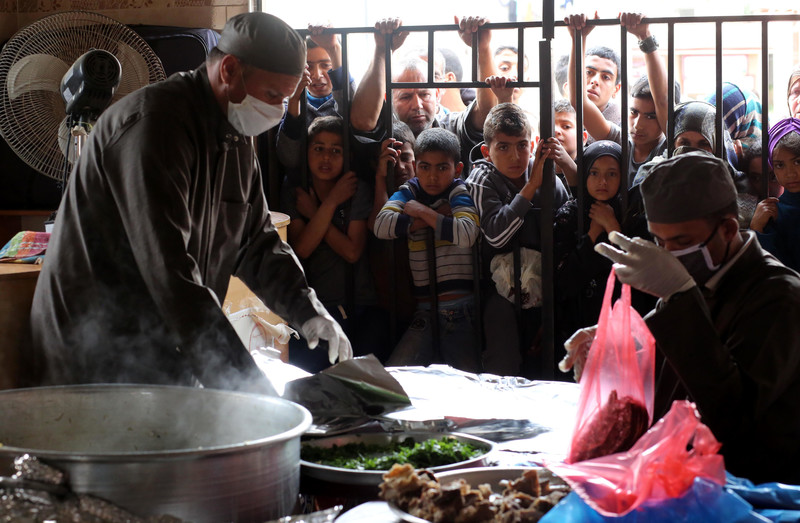 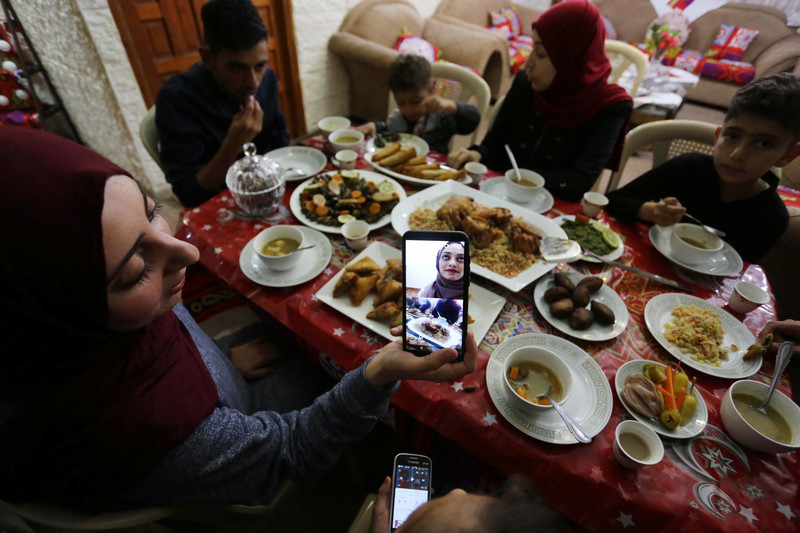 A Palestinian family calls their loved ones self-isolating at home as they break their Ramadan fast in Khan Younis, southern Gaza Strip, 25 April. 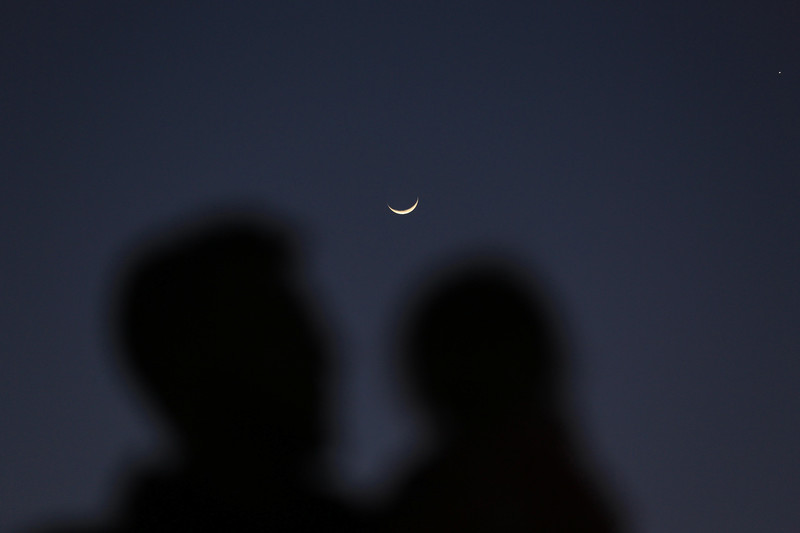 A young man and a girl look at the moon after breaking the Ramadan fast at the site of their destroyed home in Khan Younis, southern Gaza Strip, on 26 April. 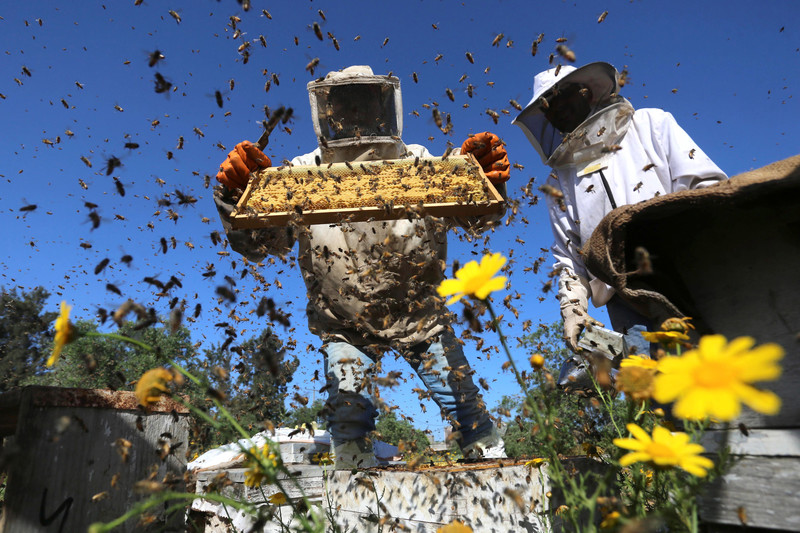 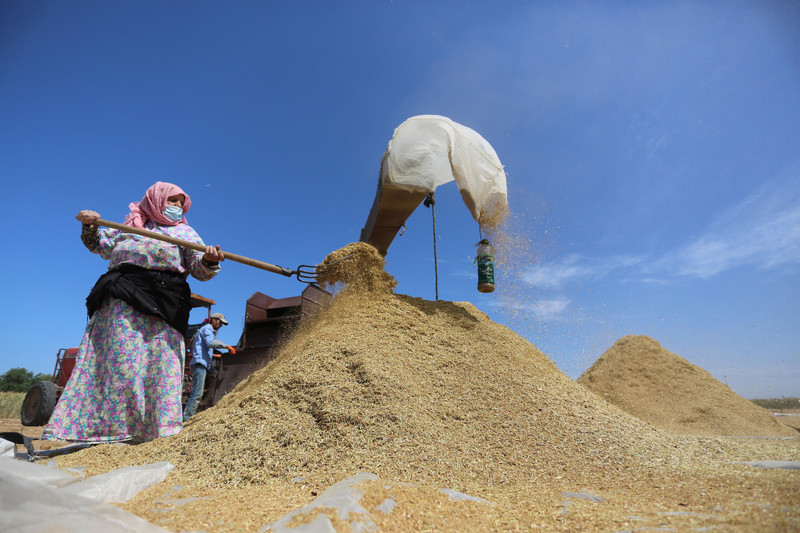