For this Palestinian family, living next to Al-Aqsa Mosque comes with a heavy price

For years, the Bashiti family has lived in a never-ending cycle of Israeli harassment for refusing to abandon their strategically located home.

Mohammed Bashiti drives his car through al-Wad Street in the Old City of Jerusalem with extreme caution. At the sign of Bab al-Majlis, he turns left towards his house and parks the car.

Together with his wife and daughter, Bashiti walks in the direction of the Israeli police post stationed right at the entrance of Al-Aqsa Gate, and enters their house, standing just a metre away from Al-Aqsa Mosque.

Mohammed, Binar and Baylasan are the only members of the family who are allowed even this partial freedom of movement.

Their three other children - Hisham, Hatim and Abdul-Rahman - have spent most of their time in Israeli prisons,  interrogation centres, or under detention and house arrest.

To understand the reasons behind the continuous Israeli harassment of the family, one needs only to enter the house, with its windows and front yard overlooking Al-Aqsa.

Since the 1980s, the Bashiti family has been receiving tempting offers from Israelis to leave their home, prospective buyers who covet its extraordinary view.

But as the family held on to the property, refusing to sell, Israeli authorities have sought to pressure them by putting them through one crisis after another, to the point where they say all their days are spent putting out fires.

Mohammed's eldest son, 20-year-old Hisham, has been in prison since last October on charges of throwing Molotov cocktails at occupation forces in Isawiya town, near Jerusalem.

Hearings have been held in Israeli courts but a verdict has yet to be reached.

Seventeen-year-old Hatim, meanwhile, has been the luckiest among his brothers as he was able to rejoin school this year and prepare for his General Certificate Exam.

However, recurrent harassment, including arrests, still poses a threat to his education and might quell his mother's dream of seeing her sons wearing their graduation uniforms.

The third son, Abdul-Rahman, a 16-year-old boy who has suffered from diabetes since he was four years old, has recently been forcibly removed from his house in Jerusalem under unclear charges and is currently under compulsory house arrest in Shuafat town, north of Jerusalem.

The Israeli secret service has demanded that his parents stay with him around the clock. If they have to go to the old city, his grandmother stays with him until they return.

Mohammed, 46, spoke to Middle East Eye in the little house in Jerusalem that his family are paying such a high price to maintain.

He said the primary cause behind this whole ordeal is the strategic location of the house with its view of the mosque, in addition to the family's refusal to consider the temptations being offered to them to vacate the property. 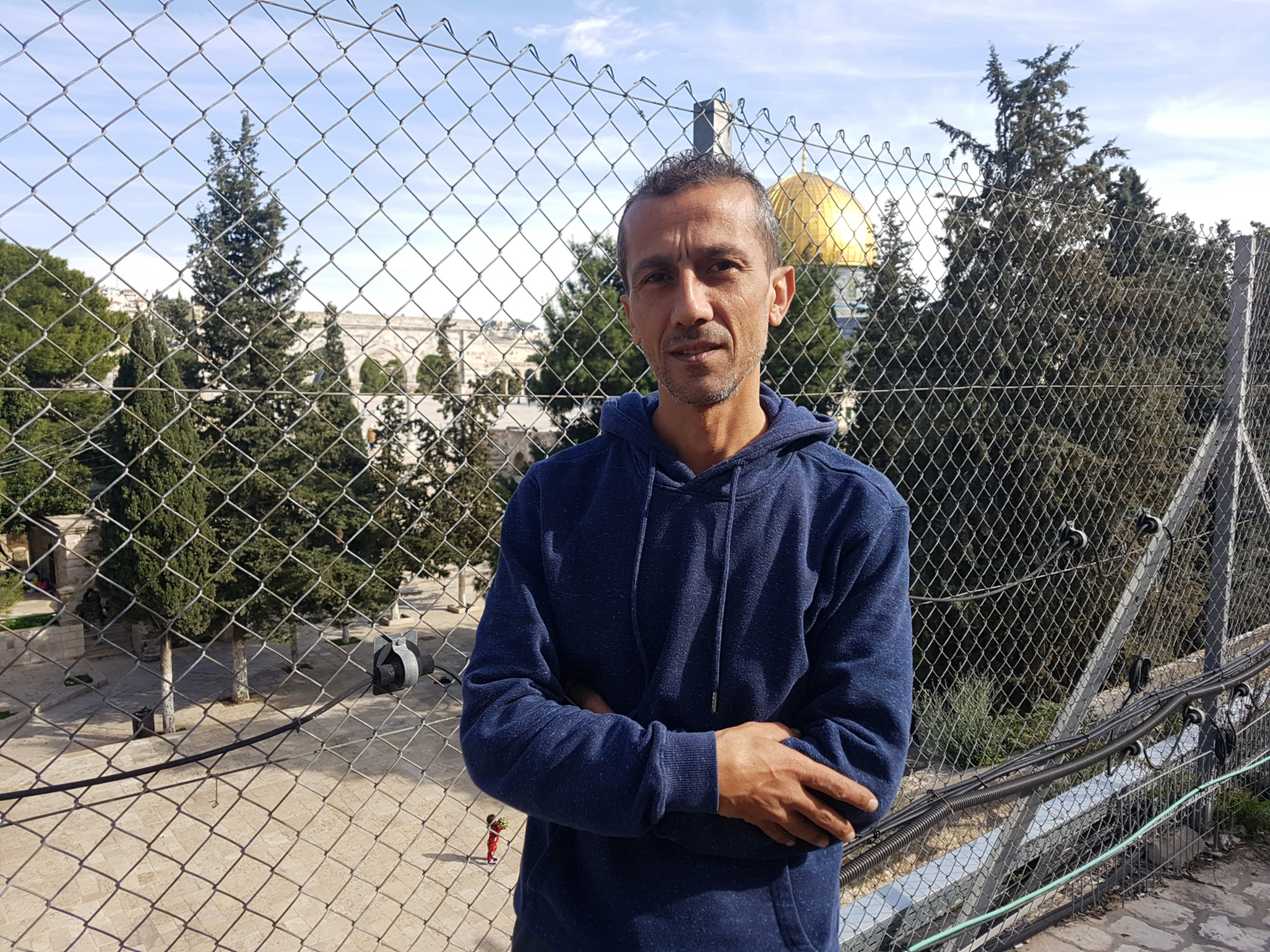 Mohammed Bashiti has spent most of his time in courts, interrogation centres, under detention and in banks to seek loans to help him face the costs of his sons’ arrests (MEE/Aseel Jundi)

Mohammed said his family owns properties in al-Sharaf neighbourhood, which has been under the control of Israel since its occupation of East Jerusalem in 1967.

In 2004, he sued the Israeli Ministry of Religious Affairs, demanding they return the properties they have confiscated, one of which was turned into a synagogue.

Mohammed said restoration work on the synagogue has been stopped by a court order because with regard to this particular property, as shown in the Israeli Property Registry, it is actually registered under the name of the Bashiti family.

However, due to the high expenses of the case and the immense pressures facing the family in the absence of any official Palestinian support, the Bashitis had no choice but to refrain from pursuing the case any further.

In the aftermath of the court case, Israeli occupation authorities increased their pressure on Mohammed and started raiding his Jerusalem home more frequently.

By the time Hisham reached the age of 13, the Israeli army began harassing him, as was later the case with Hatim and Abdul-Rahman.

"On the contrary, their childhood was marked with raids, incursions, arrests, beatings, torture, separation and house arrest.

"The Israeli occupation authorities seek to break them because they perform their prayers at Al-Aqsa Mosque regularly and maintain a good social rapport with the population of the Old City, something that the occupation does not like."

Among other reasons for their harassment is the family's role in the uprising in East Jerusalem in the summer of 2017 when Israeli authorities installed metal detectors and electric doors on the gates to Al-Aqsa.

The Bashiti boys had stood up in support of protesters who held sit-ins at the Al-Nather gate, providing them with blankets, food and water. They would also police and clean the area before the following day's sit-in.

Mohammed works as a helper to an elderly man, but a few months ago he also assumed Hisham's position as a security guard in order to provide him with a salary while he is in prison. The father's debts are increasing day by day.

With each new arrest or separation, he has to pay fines, bail money and legal fees, in addition to a myriad other expenses that have overburdened him.

Mohammed is preoccupied with how he is going to cope with the financial obligations he has to cover and is constantly looking for new guarantors every time he seeks funding.

For years now, he has been spending most of his time in courts and interrogation centres, under detention and in banks to seek loans to help him face the costs of his sons' arrests.

"I have a cupboard loaded with documents related to the arrests of my three sons, showcasing court deliberations, arrest orders, house inspections, fines and fees," he said.

"But if anything, this only adds to my determination and resolve to firmly hold on to this house adjoining one of the holiest spots in the world." 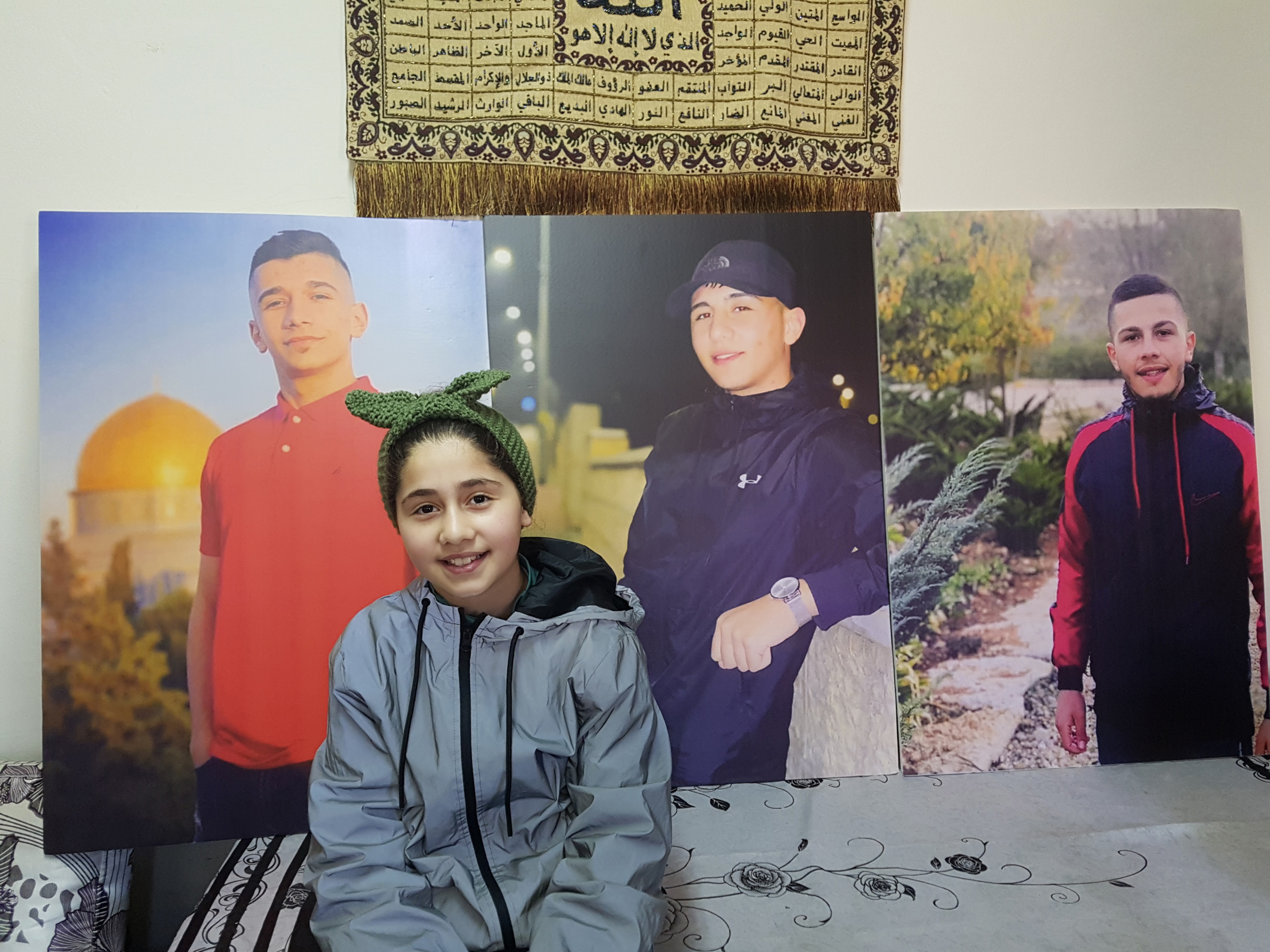 "I now buy new clothes to wear when I go to visit my brother Hisham in prison since prison has become the only destination I go to," Baylasan Bashiti says (MEE/Aseel Jundi)

Sitting by her father Mohammed's side is 11-year-old Baylasan.

She listened carefully to what he was saying as she played with one of her toys before they had to go back to Shuafat in order to comply with their compulsory residence with Abdul-Rahman.

Since her early childhood, Baylasan has witnessed the Israeli harassment against her family, including her father's imprisonment and the constant arrests of her brothers, which never seem to end.

"It was only recently that I began accepting the call for prayer by the muezzin of Al-Aqsa Mosque because for years I correlated his voice with the timing of the army attacking our house and arresting one of my brothers," Baylasan told MEE.

"Every time I buy new clothes to put on for a family picnic or an outing somewhere it does not take place. I now buy new clothes to wear when I go to visit my brother Hisham in prison since prison has become the only destination I go to."

Baylasan spoke of her own experience with Israeli military and secret service forces, who one day raided the house while she was alone and searched the place as she repeatedly told them that she was by herself and there was no one available for arrest.

"The pounding on the door was extremely frightening, and I had to open it. I tried to control myself at the beginning, but when my mother came in I lost control and started hysterically crying," she said.

"I wish I could live a peaceful life just like normal children anywhere in the world, because attacking and searching our house and arresting my brothers frightens me and disturbs my education journey." 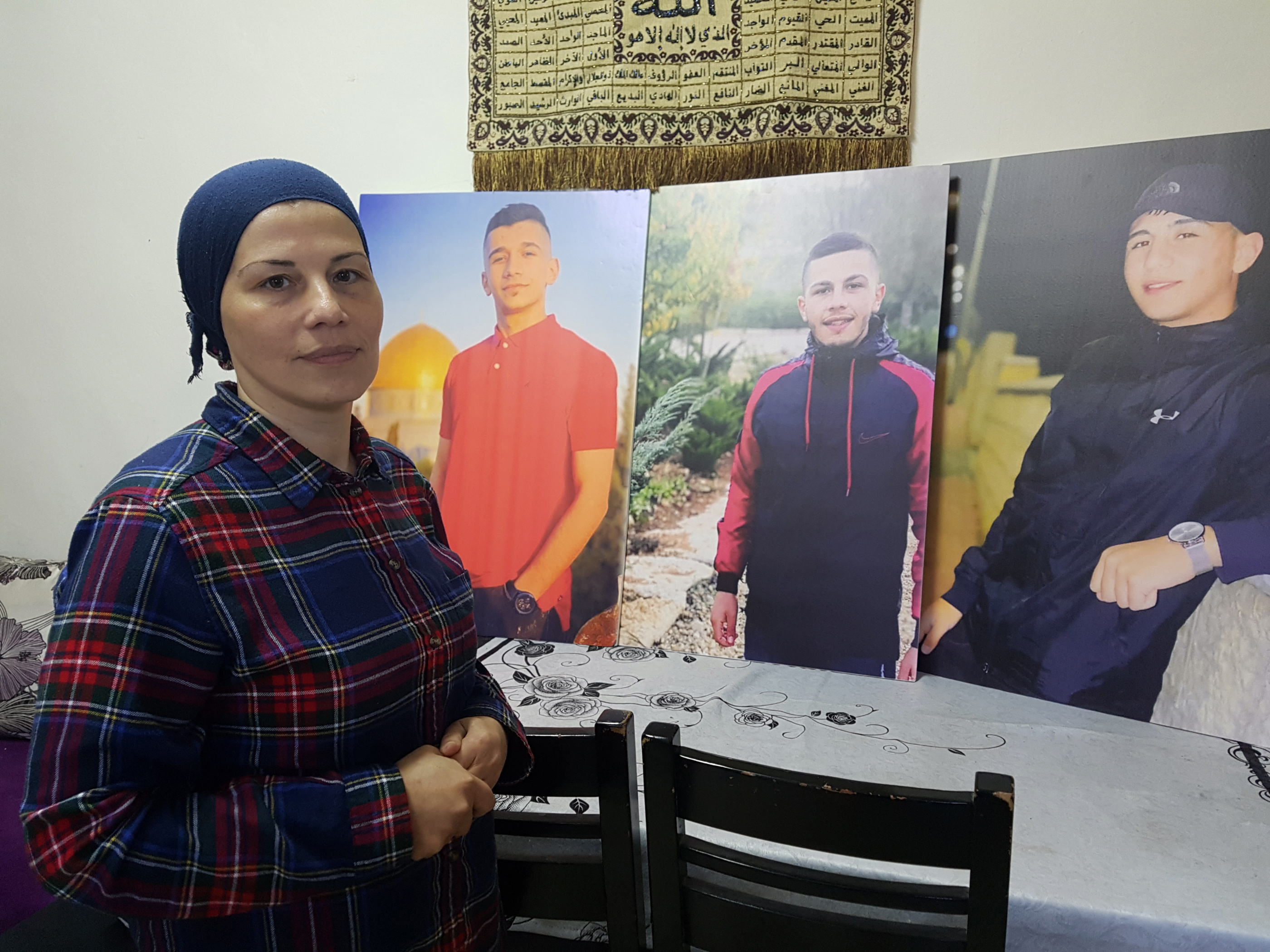 As her husband talked, his wife, Binar, listened with a composed air, but her voice broke as she herself spoke of the years of harassment against her children, especially when mentioning her sick son Abdul-Rahman, who was arrested 20 times in a course of a year.

The scene of his last detention is still vivid in her mind.

Abdul-Rahmam was arrested at dawn on 4 January while he, his brother Hatim and two of their friends were eating on the roof of the house.

The Yamam police force, an Israeli counter-terrorism unit, attacked the house and Binar heard the words "stay there".

She then rushed outside to find the four youths on the ground and shackled, with Abdul-Rahman calling on her to provide him with water and his diabetes kit.

Upon his arrest, Abdul-Rahman was transferred to hospital.

His parents came to know later from the physician in charge that he had arrived from the interrogation centre in west Jerusalem in a very critical situation that could have led to a loss of his vision, a coma, or even death.

Their son stayed in solitary confinement for 20 days before he was released and put under house arrest, where he could be subpoenaed for interrogation at any time.

Although Binar is extremely worried about the deteriorating condition of Abdul-Rahman, she is more worried about her eldest, Hisham, who has been in detention at the Majedo prison for the past four months.

Hisham was arrested in Isawiya by the Mustaribeen, an elite Israeli undercover unit who pose as Palestinians. He was severely beaten and consequently hospitalised for three days before being moved to an interrogation cell, where he stayed for 45 days.

When she visited him for the first time, Hisham told his mother: "I saw nothing during the arrest. I only heard the car doors of the Mustaribeen open and the cocking of weapons that were ready to fire.

"I have suffered from deep wounds and woke up in the hospital."

Binar said all that she hopes for is to lead a stable life with all her family members under one roof, and for Israeli authorities to stop coming after her children at the sign of the slightest unrest, even when they happen to be away from the Old City during such times.

Muhammad Mahmoud, the lawyer who represents the Bashiti boys, also believes that the reason behind the targeting of this family is the strategic location of their house. 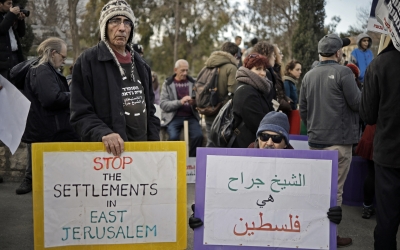 The Israeli authorities are trying to push the father to the point of despair with the aim of forcing him to negotiate leaving his home, he said.

"A hearing session for Abdul-Rahman was attended by a representative from the secret service in Jerusalem, the legal adviser of the Shabak [Israel's internal security service] and the representative in charge of room number four of the interrogation centre," Mahmoud said.

"To me this was a stark and ridiculous situation: all these high-ranking officials have come to face a child in order to request extending his detention."

During his career, the lawyer has noticed that Israeli interrogators avoid sending young detainees to solitary confinement except in what they consider extreme cases, such as alleged stabbing attempts.

For Mahmoud, this fact makes the detention of Abdul-Rahman in solitary confinement for such a long time a real dilemma and a violation of both Israeli and international law.

A number of Palestinian organisations, including the Palestinian Prisoners Club, the Commission of Detainees' Affairs, the Prisoner Support And Human Rights Association, and the Wadi Hilweh Information Center, issued a joint report stating that, during 2020, occupation authorities arrested 4,634 Palestinians, among whom 543 were underage and 128 women.

The number of administrative detention orders issued during that same period reached 1,114.