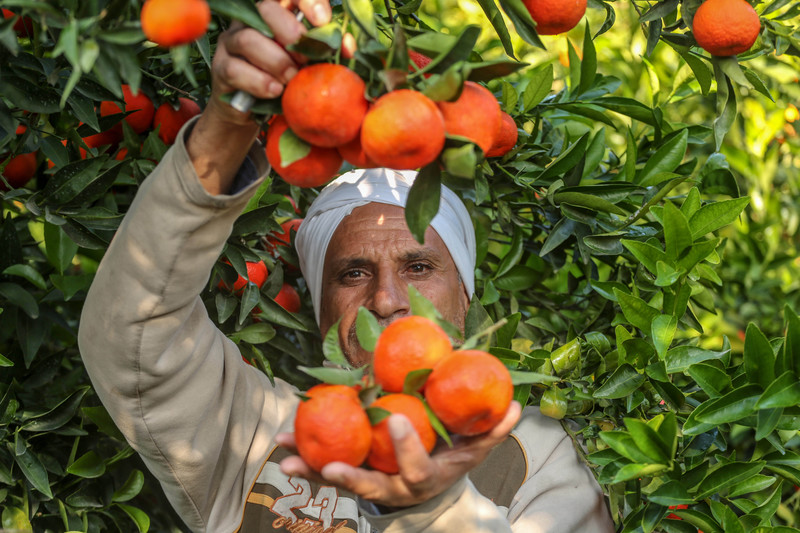 Farmworkers pick citrus fruits in the Gaza Strip on 21 December.

Ali Ayman Saleh Abu Alia, 15, died after being shot in the stomach by soldiers while he was observing confrontations that followed a protest in al-Mughayyir village near the West Bank city of Ramallah on 4 December.

Village residents hold a weekly protest against an Israeli settlement outpost built on al-Mughayyir’s land in 2015.

Kmail was shot while running away from the Border Police officers and was left on the ground and given no medical treatment for two hours before an ambulance came to collect his body.

The teen was from Qabatiya, a town in the northern West Bank. Around a dozen young Palestinians from Qabatiya have been killed by Israeli forces since 2015.

Nine children were killed by Israeli occupation forces in the West Bank and Gaza Strip in 2020, according to Defense for Children International Palestine. Six of them were fatally injured with live fire.

At least 35 Palestinians were killed by Israeli forces in 2020 or died from injuries sustained in previous years.

Abd al-Nasser Halawa, a 60-year-old who was deaf, died on 11 December, four months after being shot repeatedly by private guards at Qalandiya checkpoint near Ramallah.

Israeli Border Police said that the man had approached the checkpoint in a vehicle lane and that guards shot him in the lower limbs when he did not respond to calls to stop.

Ester Horgen, an Israeli woman who lived in a West Bank settlement, was found dead with signs of violence on her body on 21 December. Israeli authorities were treating her death as a “suspected terror attack.”

Two Israelis, one of them a soldier fatally injured during a raid, were allegedly killed by Palestinians earlier in the year.

Settler violence against Palestinians escalated in the West Bank in December following the slaying of Horgen and the death of a 16-year-old Israeli who was killed when the car in which he was traveling with four other settler youths flipped during a police chase.

A Palestinian home east of Gaza City was hit and badly damaged by an Israeli tank shell reportedly fired accidentally during December.

Separately, Israel pounded Gaza in the early hours of 26 December after a projectile was fired from the territory.

Three Palestinians, including a 6-year-old girl, were injured in the Israeli strikes, the Gaza-based human rights group Al Mezan said.

The strikes damaged a children’s hospital, a rehabilitation facility for persons with disabilities, a primary school and an education ministry training center, in addition to multiple industrial plants.

Al Mezan condemned the attacks and warned against any resumption of hostilities amid the coronavirus pandemic which has brought “unprecedented deterioration of socioeconomic conditions in Gaza.”

COVID-19 surged in Gaza during December and by the end of the month accounted for nearly half of the 22,000 active cases in the occupied territories, despite one million more Palestinians living in the West Bank than in the Strip, as of 31 December.

More than 700 Palestinians in the West Bank and Gaza Strip died from complications of COVID-19 during the month, accounting for nearly half of the 1,500 total deaths since March.

While Israel has begun to roll out vaccinations for its citizens, Palestinians living under its military occupation are excluded, despite its obligations under international law. 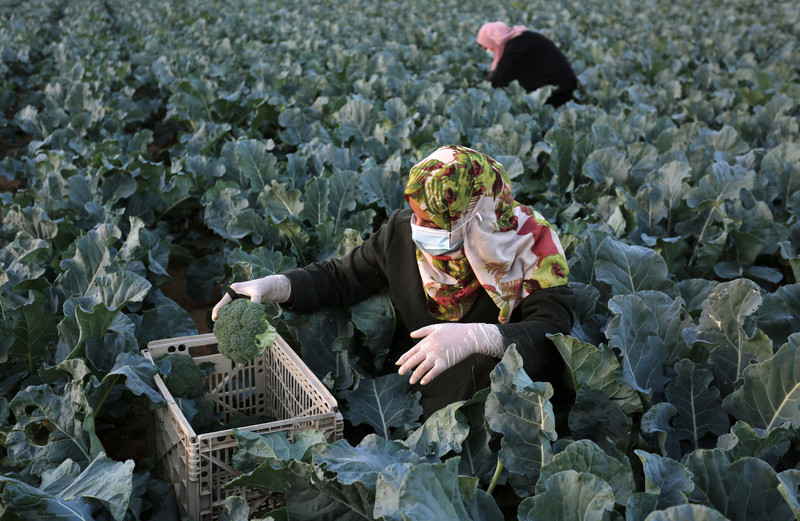 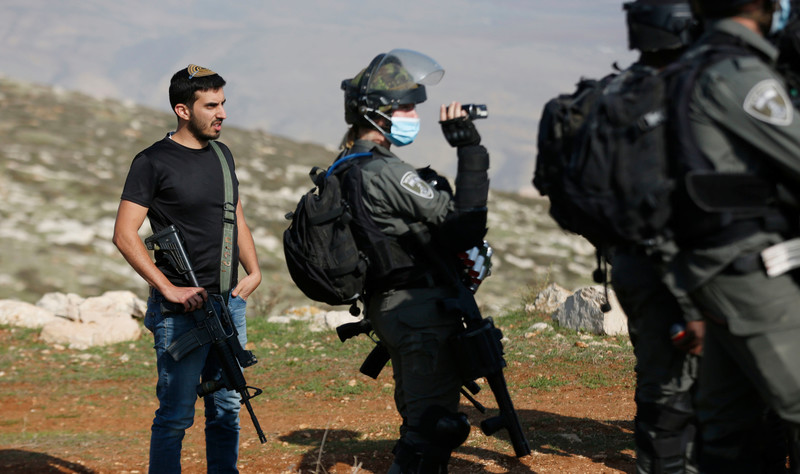 Israeli occupation forces take position during a protest against Jewish settlements in the West Bank village of Beit Dajan on 4 December. 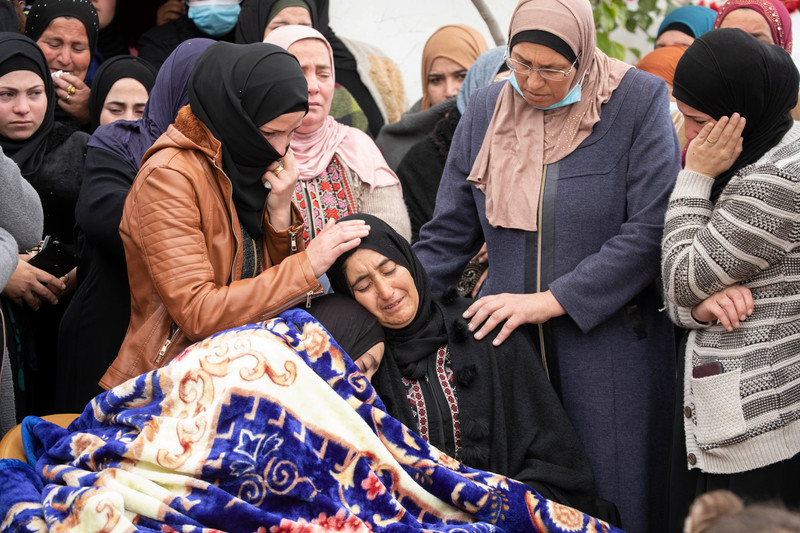 Palestinians mourn Ali Ayman Saleh Abu Alia, a 15-year-old who was shot in the stomach and killed by Israeli forces in the West Bank village of al-Mughayyir, 5 December. The boy was fatally wounded while observing confrontations between residents and Israeli soldiers following a protest against a nearby illegal Israeli settlement outpost established on village land in 2015. 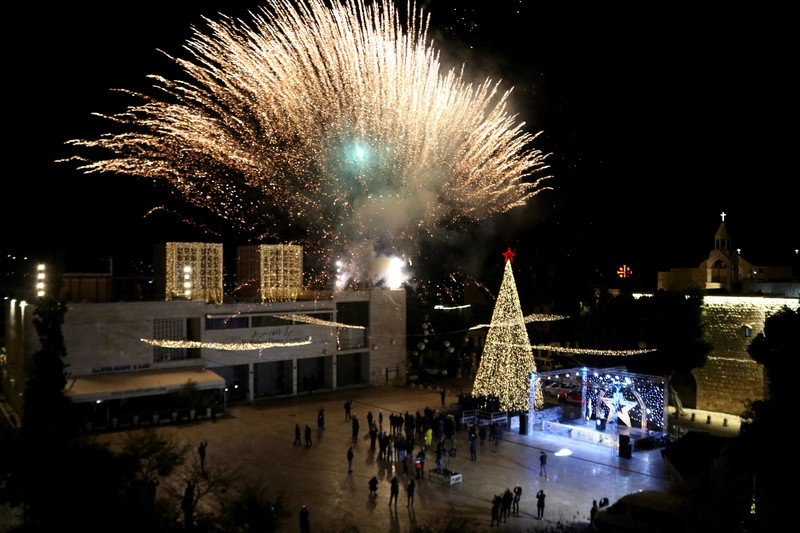 Fireworks go off as Palestinians light the Christmas tree at Manger Square outside the Church of the Nativity in the West Bank city of Bethlehem on 5 December. 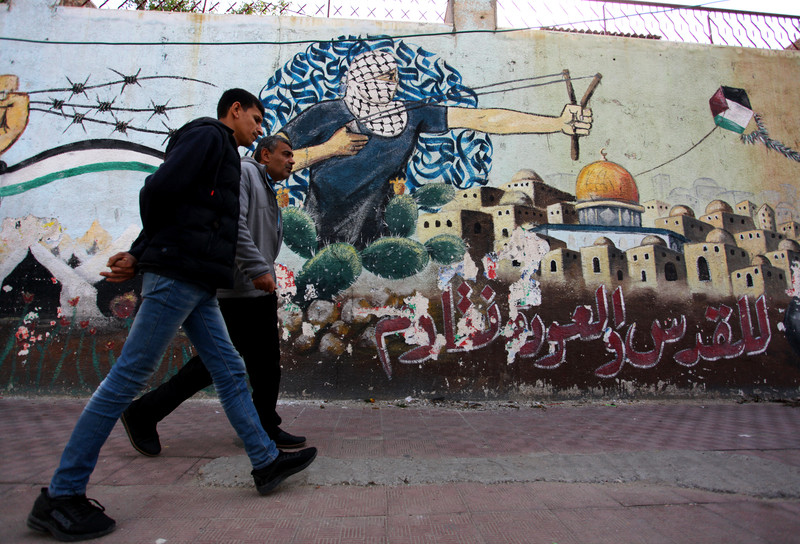 Palestinians walk past a Gaza City mural commemorating the first intifada on the 33rd anniversary of the uprising on 8 December. 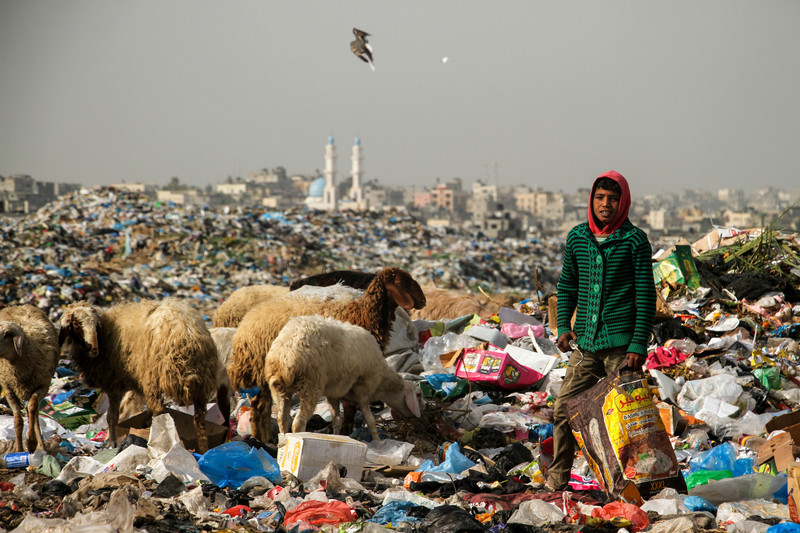 A Palestinian boy collects scrap from a garbage dump in the Bedouin village of Umm al-Nasr in the northern Gaza Strip on 9 December. 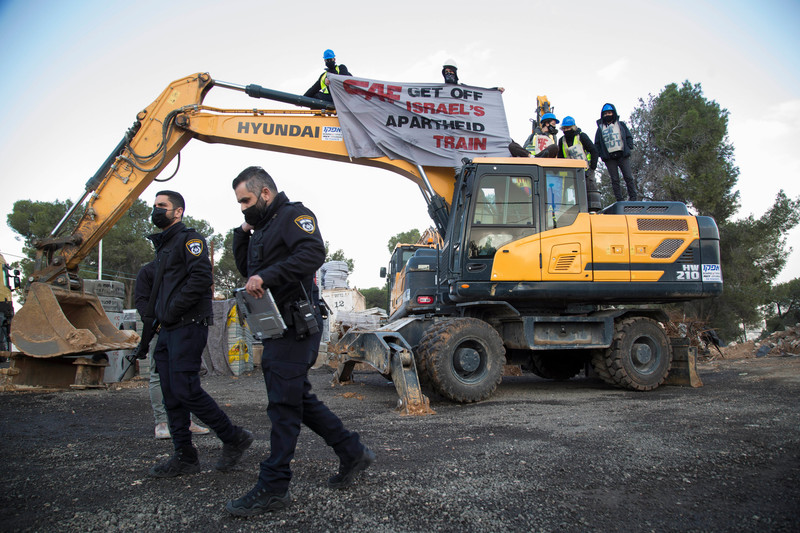 Activists hold a protest at a Jerusalem Light Rail work site calling on the Spanish company CAF to pull out from the project which entrenches Israel’s colonization of the West Bank on 16 December. Five protesters were arrested after blocking light rail construction sites. 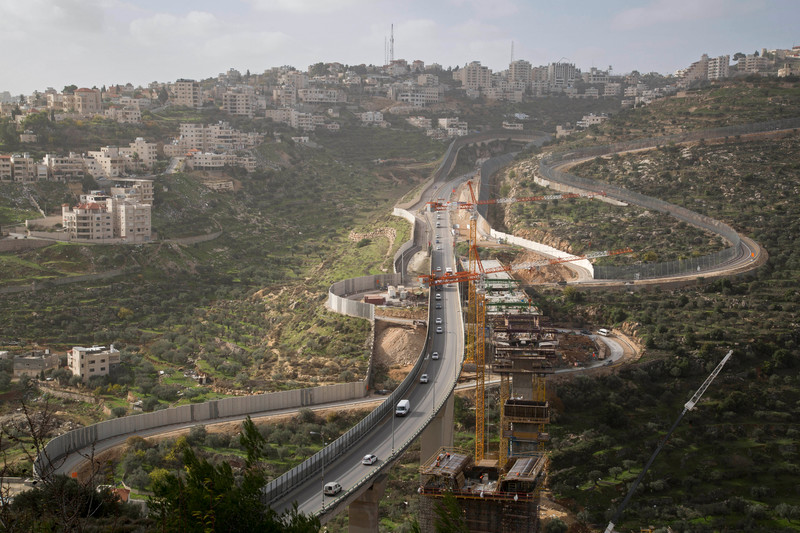 The Tunnel Road, as seen from Jerusalem’s Gilo settlement in occupied East Jerusalem on 16 December. The road will connect Jewish settlements in the West Bank that are north and south of Jerusalem. Human rights groups say new Israeli road building in the West Bank is a form of de facto annexation that will result in an explosion of settlement population growth. 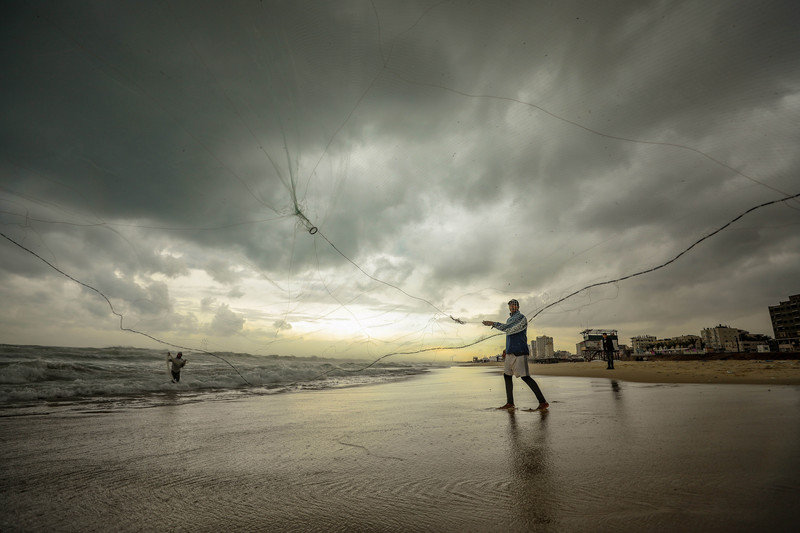 A Palestinian fisher casts a net in the water along Gaza City’s shoreline on 16 December. Palestinian fishers are subjected to harsh Israeli restrictions on the range of waters they’re able to access off of Gaza’s coast, bringing the fishing industry to the brink of collapse. 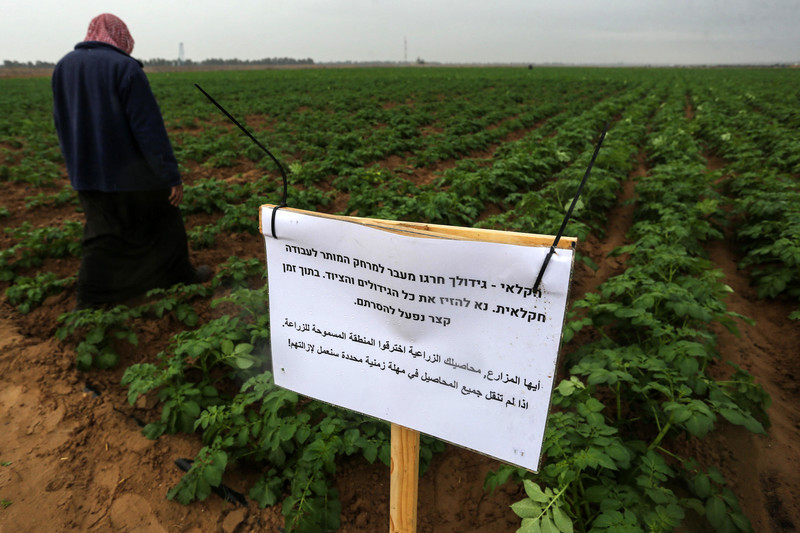 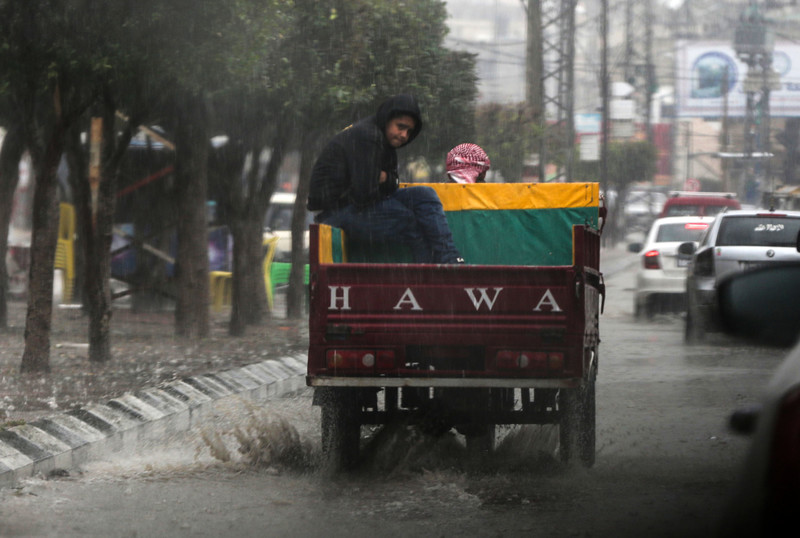 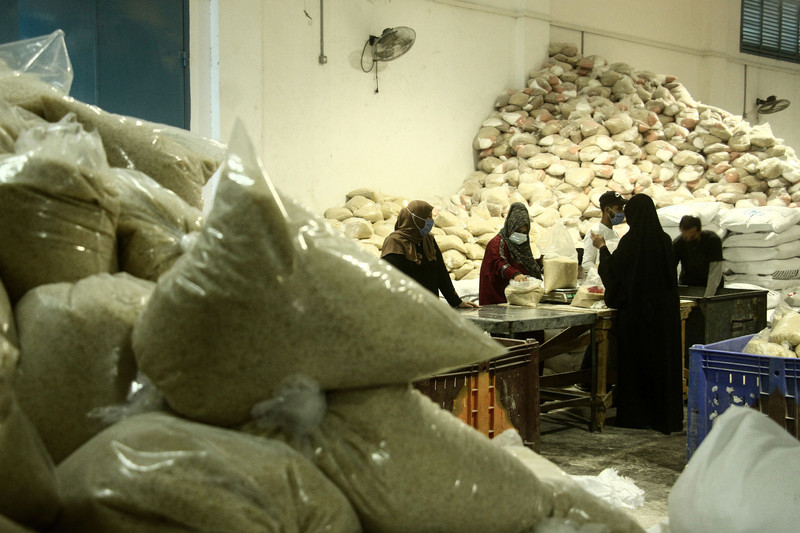 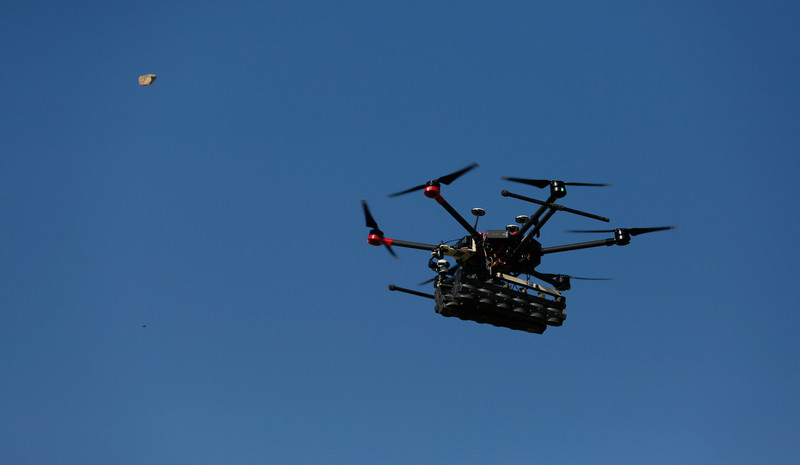 An Israeli drone drops tear gas on protesters during confrontations following a weekly demonstration against the expropriation of Palestinian land in the village of Kfar Qaddum, near the West Bank city of Nablus, on 18 December. 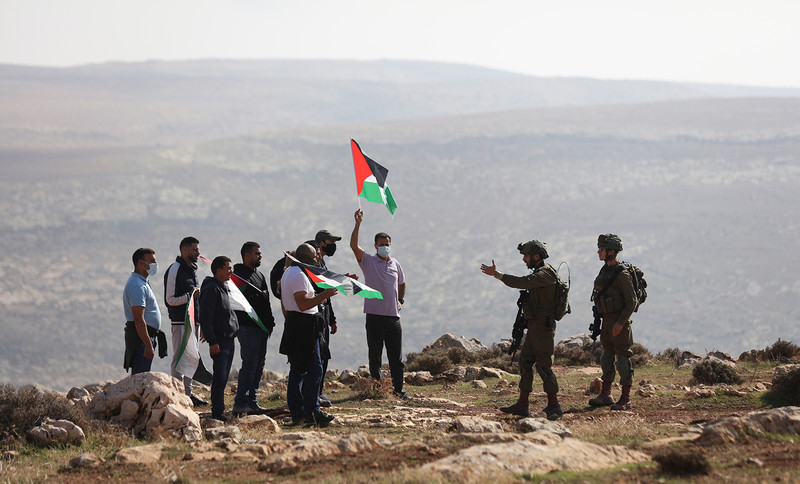 Israeli soldiers stop Palestinian protesters from reaching a Jewish settlement outpost at the outskirts of the West Bank village of Mughayir, north of Ramallah, on 18 December. 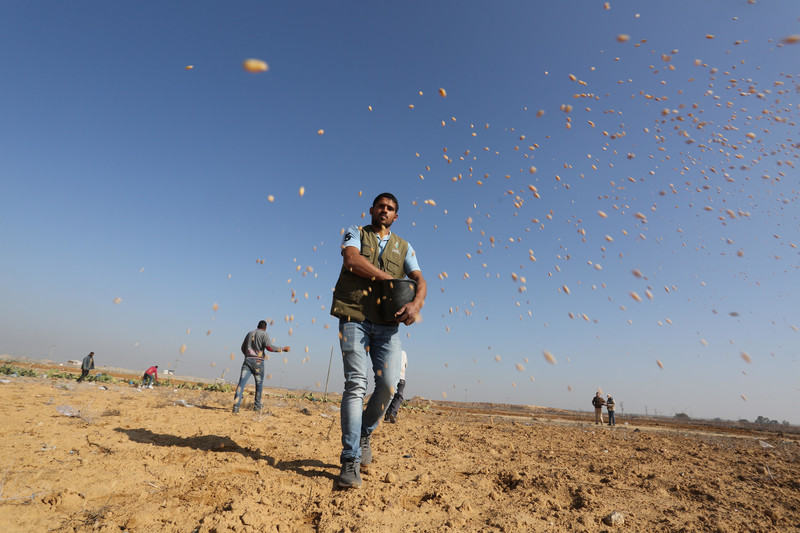 Members of the Union of Agricultural Work Committees sow wheat near the boundary with Israel in Khan Younis, southern Gaza Strip, on 21 December. Agricultural production has declined in recent years as Israel has enforced a no-go zone on Gaza’s most fertile land. 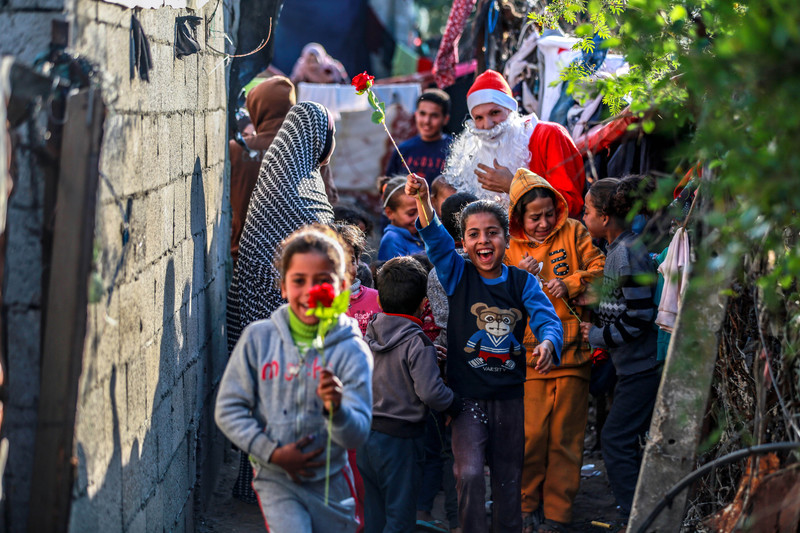 A Palestinian dressed as Santa entertains children in the Gaza City neighborhood of al-Zaitoun on 24 December. 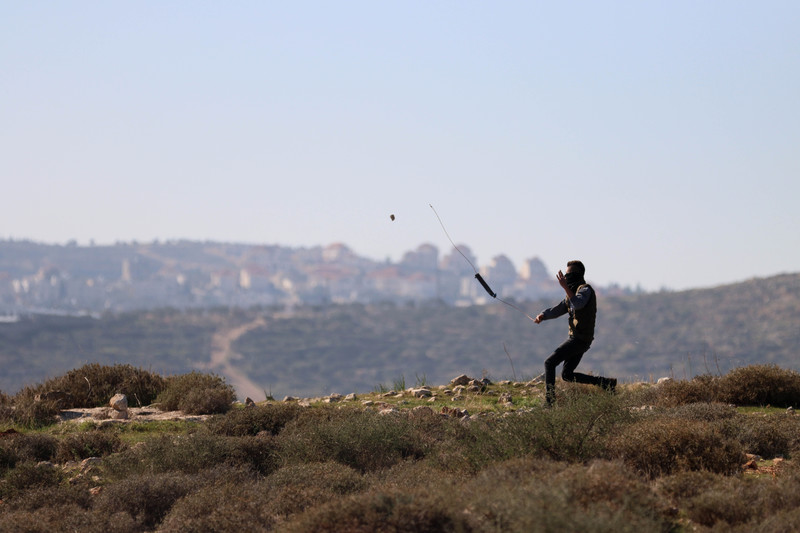 A Palestinian youth uses a slingshot to aim a stone at Israeli occupation forces in the West Bank village of Deir Jarir on 25 December during a protest against the erection of a new settlement outpost on land next to the village. Extremist “hilltop youth” established the outpost after one of their members was killed in a car crash during a police chase after throwing stones at Palestinians. 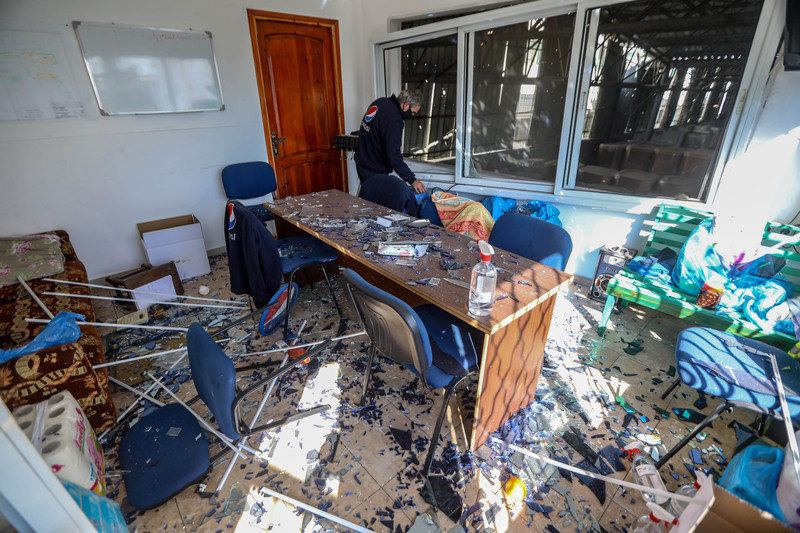 A Palestinian man assesses the damage following an Israeli airstrike in Gaza City, 26 December. Israel struck several sites in Gaza which has been under a severe economic blockade imposed by Israel since 2007. 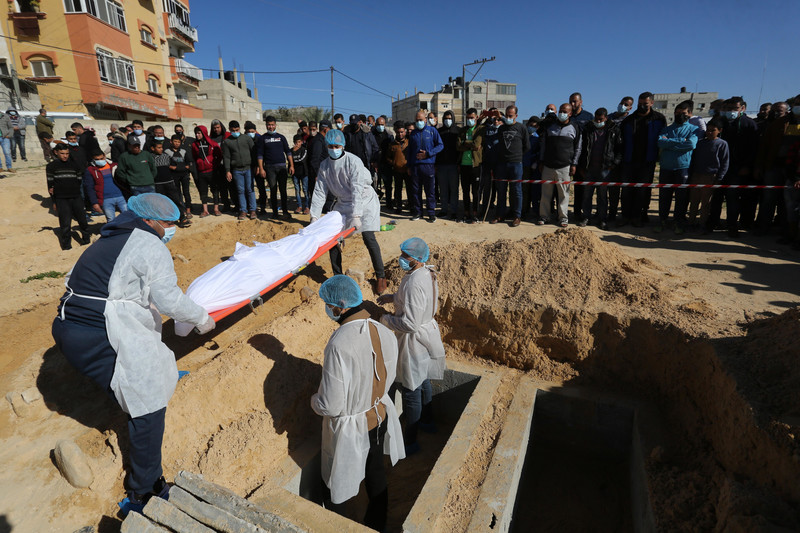 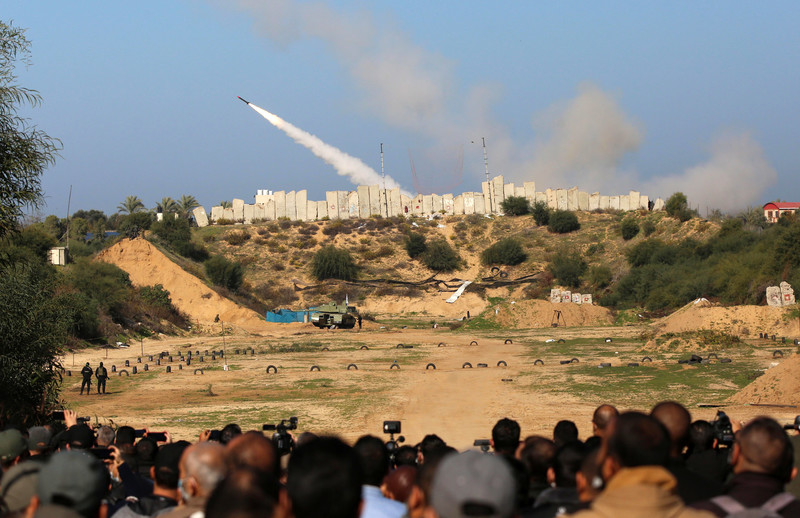 Palestinians watch as resistance factions fire a rocket towards the sea during a drill in Gaza City on 29 December. 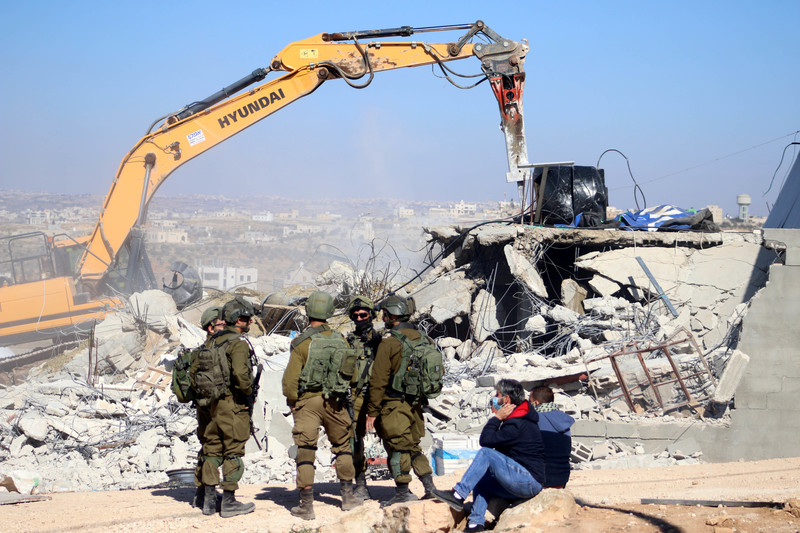 Israeli forces demolish a Palestinian home east of Yatta, near the West Bank city of Hebron, on 29 December. Residents confronted occupation forces who fired rubber-coated steel bullets, stun grenades and tear gas at youths who gathered to attempt to prevent the demolition. 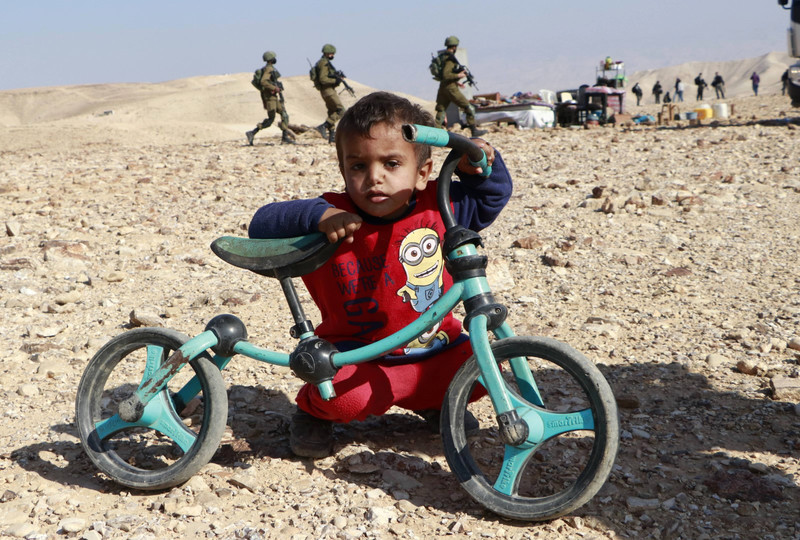 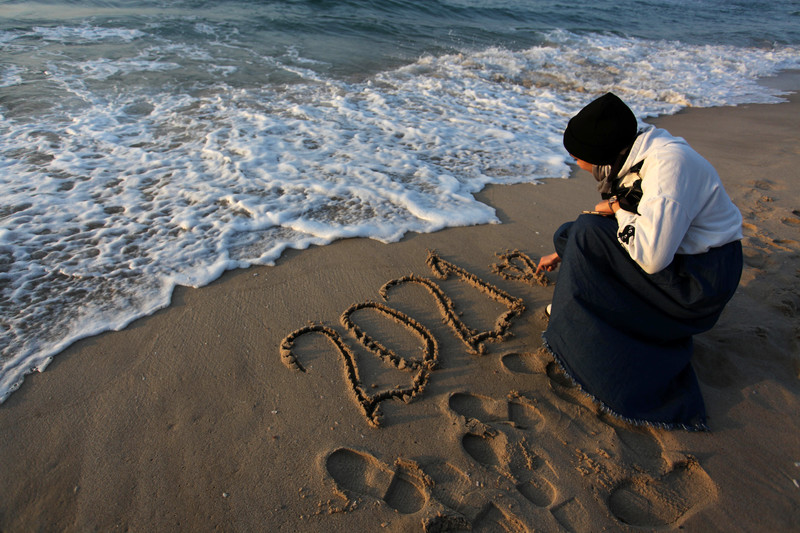 A Palestinian woman writes on the beach in Gaza City on the last day of 2020 before a weekend curfew amid a surge in COVID-19 in the territory.