On 14 November 2012, Israel launched "Operation Pillar of Defence" against the Palestinians living in the Gaza Strip. Over the following eight days, almost 175 Palestinians were killed and more than 1,000 were injured. Five years later, Gaza is still subject to Israeli aggression, in violation of the terms of the ceasefire agreement.

What: Operation Pillar of Defence

Where: The Gaza Strip

Tensions between the Israeli occupying forces and Gaza escalated in the days leading up to the military operation. On 10 November, Israel responded to an attack on a military jeep by killing four Palestinian teenagers while they played football in a Gaza sports stadium. Days of rocket fire from both sides ultimately led to Israel launching an official offensive, ostensibly against the besieged territory's ruling party, Hamas.

On Wednesday afternoon, 14 November, the Israeli army targeted and killed Ahmed Jabari, the chief of the Hamas military wing, prompting widespread protests. The army also struck 20 other points in the Gaza Strip, including residential areas, claiming that weapons were hidden in civilian neighbourhoods. More than 10 people were killed on the first day, including 11-month-old Omar Misharawi, the son of BBC Video Editor Jihad Mishrawi.

Israel continued its missile strikes throughout the night, and Hamas responded with rocket fire into Israeli suburbs and cities the next day, although no one was killed.

On 16 November, the then Prime Minister of Egypt, Hisham Qandil, visited Gaza to show solidarity with the Palestinian people, but a three hour ceasefire that was arranged for his visit did not last long; both Israel and Hamas accused the other of firing over the border during the brief lull. That night, Israel called up over 75,000 army reservists and visible signs of a build-up of ground forces near the Gaza border prompted many analysts to believe that a ground offensive could be imminent.

The Israeli government broadened its targets in the offensive to include Hamas government sites as well as allegedly military targets, launching an air strike on Saturday, 17 November, that destroyed the offices of Prime Minister Ismail Haniyeh. The World Health Organisation condemned the strikes, stating that Gaza's hospitals were overwhelmed with casualties and faced a critical shortage of drugs and medical supplies. The same day, Haaretz quoted Israeli Interior Minister Eli Yishai saying that, "The goal of the operation is to send Gaza back to the Middle Ages."

In the occupied West Bank, hundreds of Palestinians demonstrated in support of the people in Gaza but were met with aggression from Israeli forces; dozens were injured in subsequent clashes.

The bombardment of the Gaza Strip continued over the weekend, with the Israeli navy firing into the enclave as well; this was a first and the naval barrage killed a 13 year-old girl and her uncle on Sunday evening. Two buildings housing journalists from Sky News, ITN, Al-Quds TV and Press TV were also hit in an Israeli attack, injuring several reporters. The NGO Reporters without Borders condemned Israel's action, and the Foreign Press Association issued a statement expressing concern about the strike, pointing to a UN Security Council statement that forbade all attacks against journalists in combat zones.

That day also witnessed the highest death toll of any single strike during the operation, when a missile destroyed the family home of Jamal Mahmoud Yassin Al-Dalu, killing twelve people; ten of his family members, including five children and an elderly woman, plus two of the family's neighbours, including another elderly woman. Israel later admitted that the strike on the residential building had been intentional and that the target was Mohamed Al-Dalu, a police officer who was killed in the attack; neighbours insisted that he had no political affiliations.

Over the next few days, the Israeli bombardment killed dozens of people in Gaza, while several people were injured in Israel as a result of rockets fired by the beleaguered Palestinians. US Secretary of State Hillary Clinton arrived in Tel Aviv on Tuesday 20 November, to try to promote a ceasefire. She discussed the volatile situation with Israeli Prime Minister Benjamin Netanyahu but did not meet with Hamas, due its designation by the Americans as a "terrorist organisation".

The next day, Egyptian Foreign Minister Mohammed Kamel Amr stood alongside Clinton and announced that a ceasefire in Israel-Gaza hostilities would take effect at 9pm local time. The truce came after hours of intense shuttle-diplomacy involving Clinton, as well as the then UN Secretary-General Ban Ki-moon.

Before the announcement, attacks rocked both sides of the border. Inside Israel, a bomb blast on a bus in central Tel Aviv injured 28 people, three seriously. In Gaza City, the bombing met with approval from Hamas spokesman Sami Abu Zuhri, who called it revenge for civilian deaths in Gaza in recent days, particularly that of the Al-Dalu family. Israeli bombs rained down on the territory in response.

After the Israel occupation forces agreed to a ceasefire, the residents of the Gaza Strip enjoyed their first peaceful night in a week. Four Israelis and some 174 Palestinians, 107 of whom were civilians, were killed in the eight-day conflict.

Netanyahu declared the Israeli offensive to be a success, saying that his forces had dealt a painful blow to Hamas, destroying thousands of rockets and killing many "terrorist commanders". Hamas also claimed victory, despite the Palestinian losses.

As per the ceasefire agreement, Israel was required to "stop all hostilities in the Gaza Strip land, sea and air including incursions and targeting of individuals." The same was required from the Palestinian factions. However, Israel's regular incursions against civilians in the Strip as well as the continuing blockade, mean that, five years later, the Palestinians in the enclave are still not at peace. 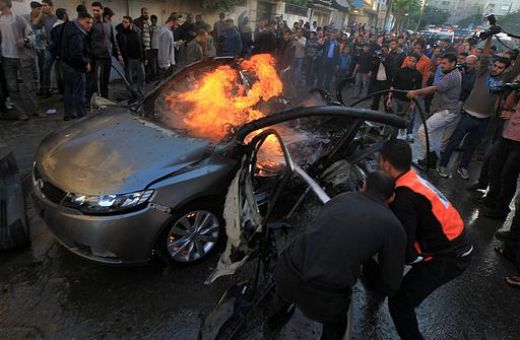 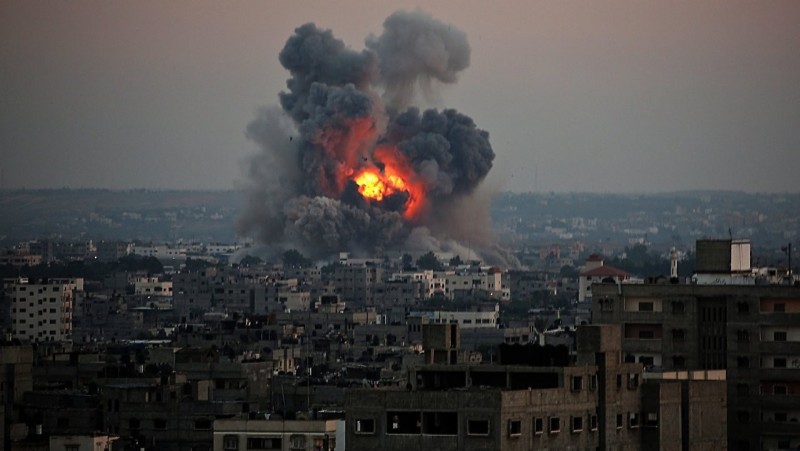 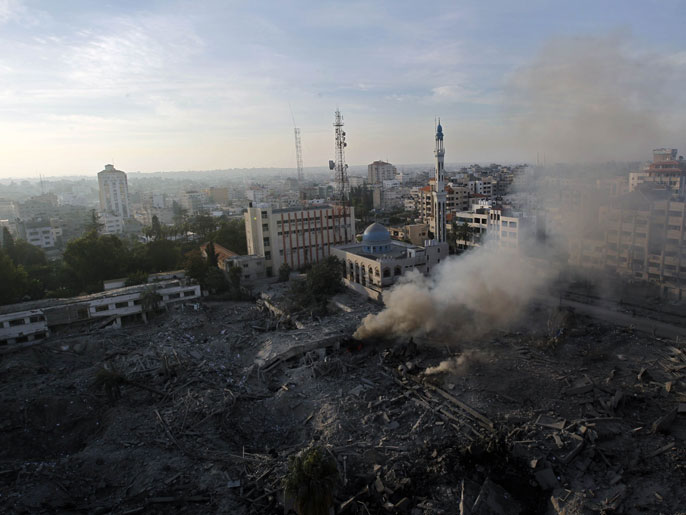 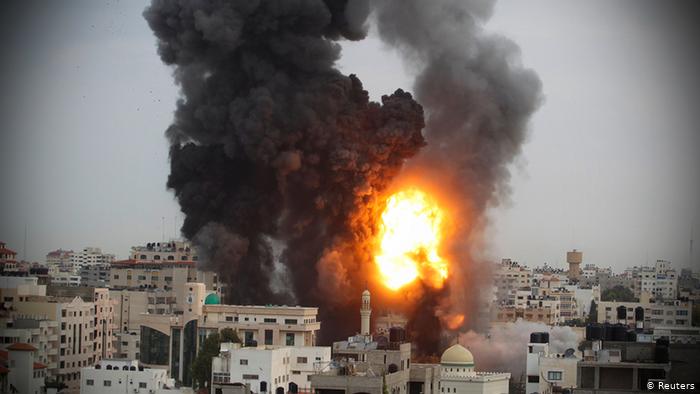 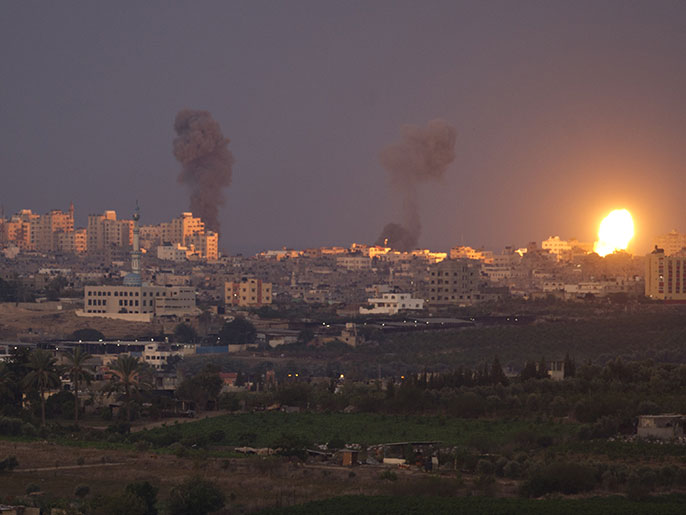 epa03472904 Smoke and explosions seen as a bomb dropped by Israeli warplanes explodes at a alleged position of Hamas extremists in the northern Gaza Strip, 16 November 2012. Israeli forces launched a heavy barrage of bombs at the break of dawn but also announce a three hours ceasefire during the visit of the Egyptian Prime Minister Hesham Qandil in the Gaza Strip. EPA/OLIVER WEIKEN[/caption] 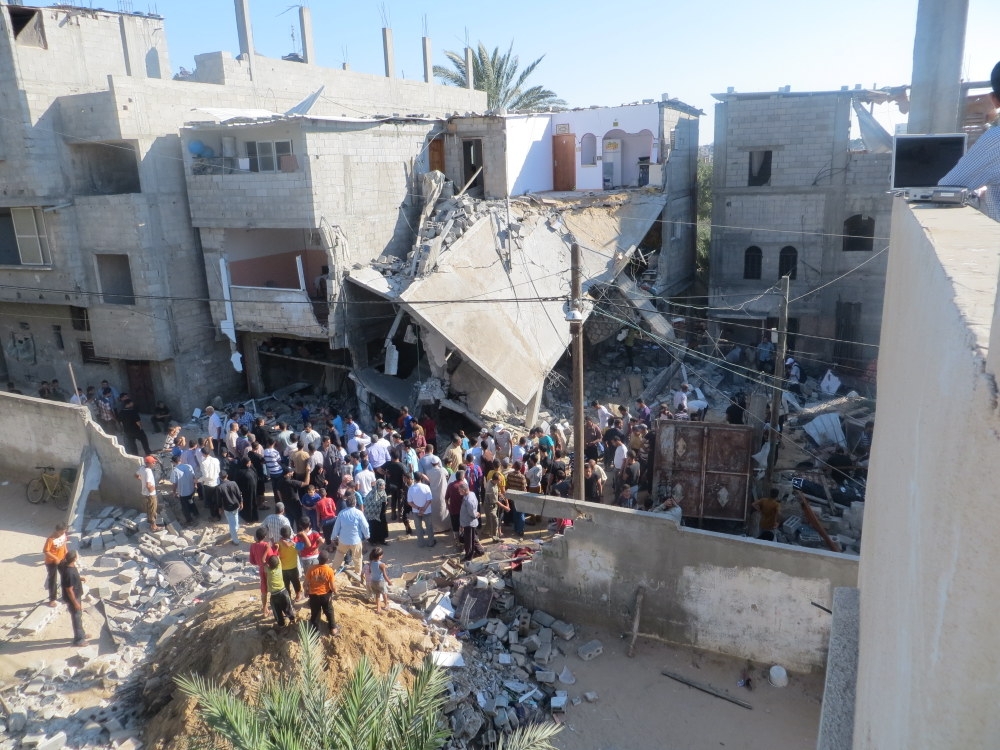 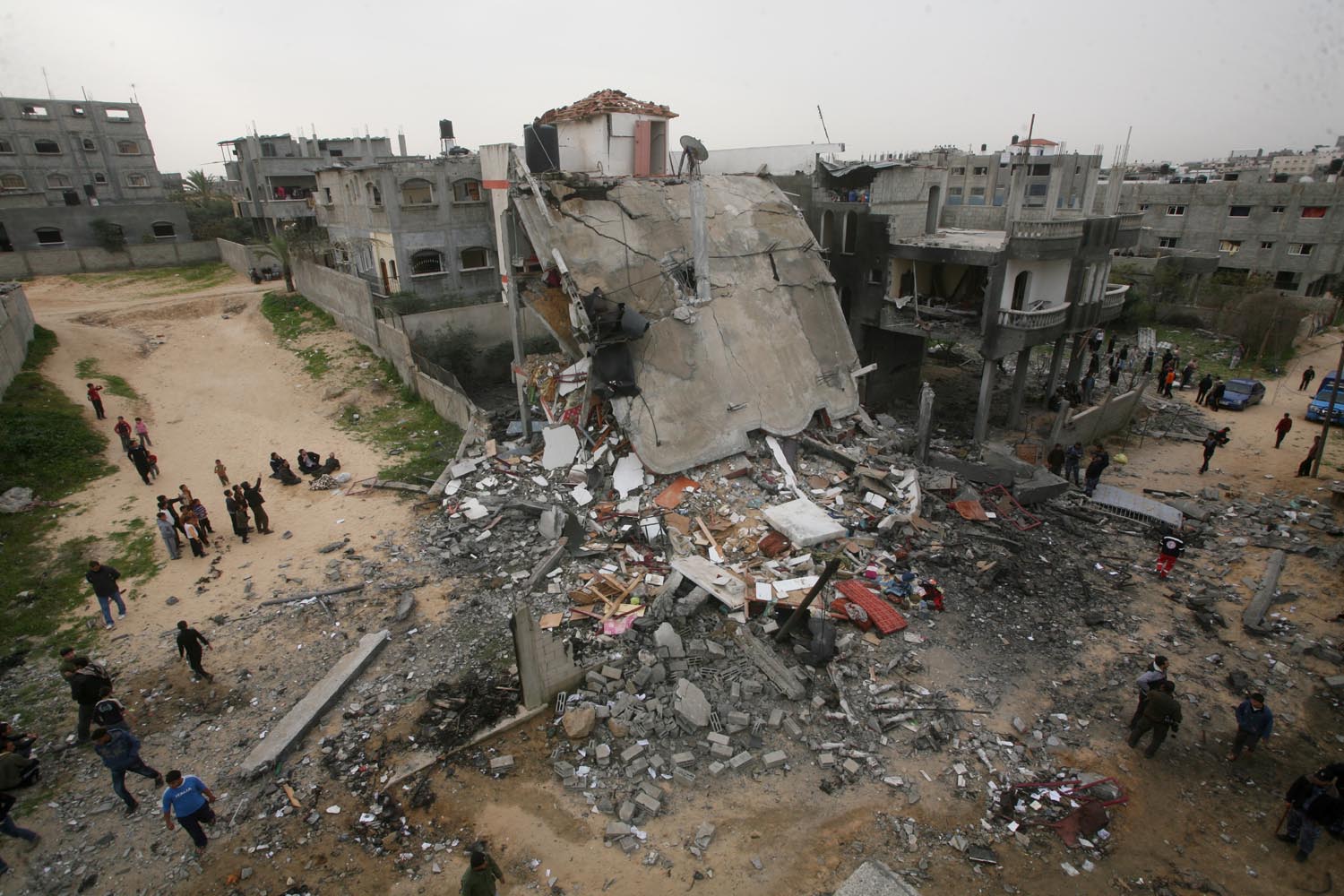