On Tuesday, 4IL – a propaganda outlet of the ministry – tweeted the handles of dozens of accounts it claimed were “anti-Israel bots and trolls who try to steer public opinion.”

The ministry also issued a report claiming it had “examined over 250 accounts, in which 70 percent of them (170) were found to be considered inauthentic.”

The report claims that the accounts were trying to “stir anti-Israel sentiment online and manipulate discourse against Israel” by, among other activities, promoting calls for Israel to be held accountable for war crimes at the International Criminal Court.

The report said strategic affairs minister Orit Farkash-Hacohen “called on Twitter in a letter to remove the problematic accounts.”

The ministry also posted a video of “activist” Hallel Silverman reading out the Twitter handles targeted for closure.

Silverman’s Twitter bio indicates she is a supporter of Democratic presidential nominee Joe Biden and his running mate Kamala Harris.

Palestinians have been reporting that accounts are being shut down by Twitter.

One prominent account that appears to have been suspended – though it is unclear if it is related to the Israeli ministry’s effort – is that of Dr. Basem Naim, a former health minister in Gaza.

Even if Israel did identify some inauthentic accounts, the number it claims to have found – 170 – is tiny, given the billions of people worldwide, including millions of Palestinians, who use social media.

The ministry’s exaggerated claims painting this as a major coup against what it calls “delegitimization networks” smacks of desperation to smear all legitimate criticism of Israel as somehow contrived or inauthentic – when that is evidently not the case.

Nonetheless, internet censorship spurred by Israel is a growing problem.

In August, Facebook shut down pages belonging to the health ministry in Gaza – closing off a vital outlet for public information amid the coronavirus pandemic.

Following inquiries by The Electronic Intifada, Facebook apologized and reversed the decision, claiming it was a mistake.

Twitter has previously closed the accounts of Palestinian journalists and publications.

For years, Facebook has been waging a campaign in cahoots with Israeli occupation authorities to silence and censor Palestinian media.

It has shut down the accounts and pages of dozens of Palestinian journalists and publications – on the Israeli-supplied pretext that criticism of Israel and its crimes against Palestinians constitute “incitement.”

It has labeled Palestinian journalism as “hate speech.”

Facebook has even appointed an Israeli government censor to its “oversight board” – which effectively determines what content to censor or permit.

Al Jazeera’s undercover documentary The Lobby–USA exposed how the ministry works secretly with US organizations to spy on, smear and intimidate US citizens who support Palestinian human rights, especially BDS – the boycott, divestment and sanctions movement.

Al Jazeera suppressed the documentary, after Qatar, which funds the channel, came under major pressure from the Israel lobby.

However, in 2018 The Electronic Intifada obtained and released the documentary in full. 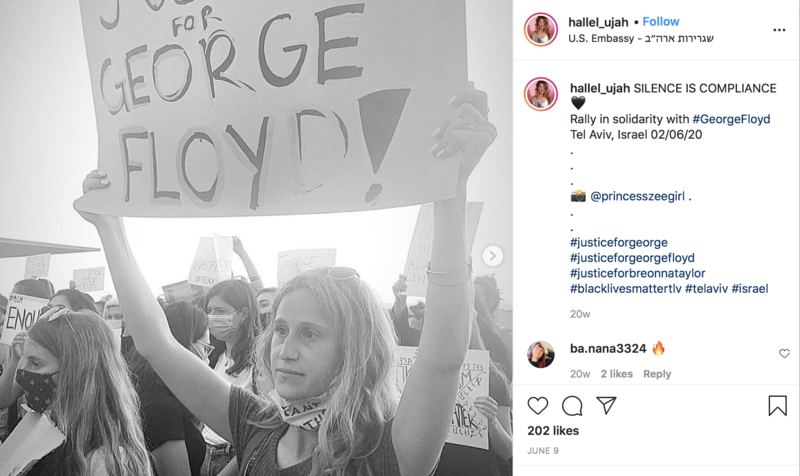 Hallel Silverman is an interesting choice as the face of Israel’s latest anti-Palestinian campaign.

Born and raised in Massachusetts, Silverman moved to Israel when she was 11.

Her Twitter bio says she is involved in “Branding and New Media.” Indeed she appears to be a branded product herself.

Silverman has bragged about completing a course in “international diplomacy, politics and communications” taught by the Israeli foreign ministry.

She is also a product of IDC Herzliya, an Israeli university that has long been a training ground for propagandists for Israel.

IDC Herzliya even set up a “war room” – a troll farm with rows of people sitting at computers posting on Facebook to counter criticism of Israel’s abuses against Palestinians.

Hallel Silverman is the niece of comedian Sarah Silverman.

In addition to promoting Biden and Harris, she also poses as a supporter of Black Lives Matter.

This is almost certainly part of Israel’s efforts to gain credibility among progressives.

Israel and its lobby, in fact, view Black Lives Matter as a major threat and have sought to co-opt or undermine the movement.

But Silverman is no supporter of human rights and equality.

At the height of Israel’s 2014 war on Gaza, she attended an event carrying a sign that she was “proud to be a soldier in the Israeli defense forces.”

In the space of 51 days, Israel’s attack killed more than 2,200 Palestinians, including 550 children.

Dozens of families were obliterated.

Months before the attack, Silverman posted on Instagram that she was “so excited” to be drafted into the army that would go on to commit these atrocities, as it had so many before.

Free speech advocates, including this writer, have long warned that calls for social media companies to suppress content under the banner of fighting “hate speech” or “disinformation” would lead to censorship of marginalized groups, particularly Palestinians.

Veteran journalist Jonathan Cook observes in Middle East Eye this week, that the kind of censorship faced by Palestinians due to Silicon Valley’s collusion with Israel should be seen as a warning to others.

“The online fate of Palestinians points to a future in which the already powerful will gain ever greater control over what we know and what we are allowed to think, and over who is visible and who is erased from public life,” Cook writes.

This article has been updated since initial publication.